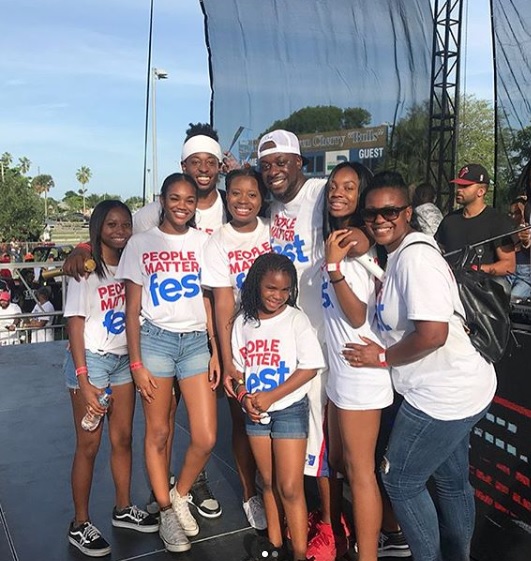 Three years ago Papa Keith, a 20 year Miami based radio veteran, decided that he needed to do more in the community to stop gun violence after a heart to heart conversation with his friends.

“My friends had sort of an intervention with me — two of them one day after the next. They pretty much said ‘what will your legacy be? You got the nice house, nice car, but what else are you doing to make an impact?’ Then after that I knew I had to do something with a deeper meaning,” said Papa Keith, who hosts the afternoon drive show on 103.5 The Beat.

After Papa Keith’s “Aha” moment, he immediately dug into community work, making himself available to assist non profits and grassroots efforts to help them spread the word about what they were doing via his afternoon drive radio show.

In the fall of 2016, when Papa Keith was getting his start into community activism, he realized that the election was approaching and his large millennial audience was not apart of the local conversation.

“They weren’t reaching the youth and I speak to them everyday. I saw it as an opportunity to make sure millennials were informed for the election that was going to make a big difference in all of our lives,” said Keith, who admits he first paid attention to politics during President Barack Obama’s campaigns.

He extended his platform to local, state and national politicians and eventually landed coveted interviews with President Obama and Presidential Candidate.

“That was amazing to speak with them and ask them questions that my listeners wanted to know. I’d say it was one of the highlights of my career,” said Keith. “It also further solidified the power of my platform.”

“This is Liberty City’s first and only Hip Hop music festival,” said Keith. If you’ve never heard of or attended the People Matter Fest, we told you last year 6 Reasons why you should attend. Those reasons still hold true TO THIS DAY (Boxer Deontay Wilder Voice lol)!

The iHeartMedia nationally syndicated radio host said he wanted to take on addressing gun violence in Miami-Dade’s inner cities through giving kids and youth a first class free music festival in their own community.

“People think of Hip Hop in many negative ways; but I see it as a way to bring the community together for a great cause. Everyone listens to Hip Hop, so why not give the people what they want, but wrapped in a message that says they matter and the lives of others matter,” said Keith.

To address the issue of gun violence, Papa Keith and the PK4PM Team added a 24-hour Ceasefire initiative asking for a Miami-Dade County wide request for no gun violence for 24-hours. The team has been successful for two years in a row with no gun violence happening for 24 hours in the County. This year the Cease Fire will begin Friday June 14th at 7 p.m. and end June 15th at 7 p.m. Papa Keith said to him this is one of the most important parts of the festival’s programming.

The festival organizers also decided to honor 24 people in the community who have done meaningful work to end gun violence in the County. Among honorees this year are the Hunger 9, members of the Circle of Brotherhood who staged a nearly month long hunger strike in March to bring awareness to the issue of gun violence in Liberty City. A press conference and awards ceremony will take place today June 14th at the iHeartMedia Miami building to recognize all of the community members being honored.

Now in its third year, the People Matter Fest has grown to attract more than 3000 people across Miami-Dade County, with support from many sponsors, Miami-Dade Mayor Carlos Gimenez and County Commissioner Jean Monestine. The PK4PM team has even created smaller pop-up events where they go into neighborhoods through the year and feed the community while also providing games, bounce houses and free resources for the attendees.

For more information on the People Matter Fest click here and check out event pics and flyers below.