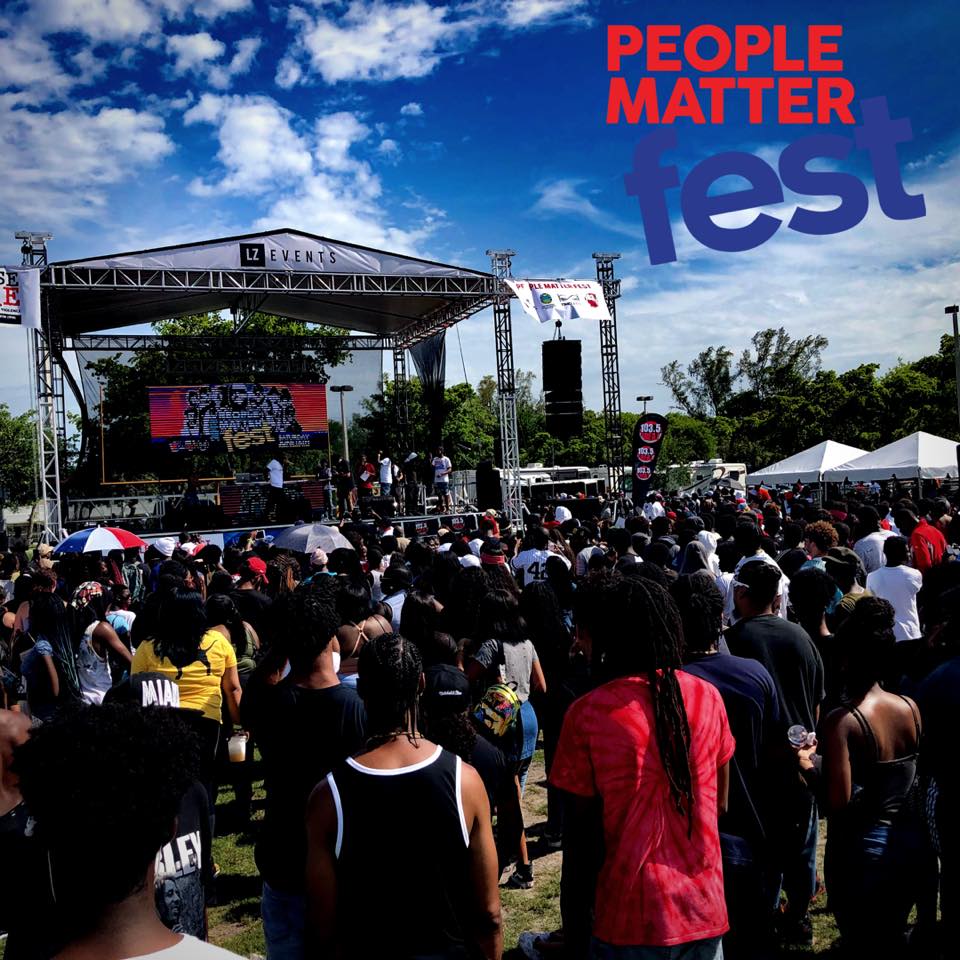 Editors note: This article was originally published with the headline “6 Reasons to Attend the Second Annual People Fest.” Some of the details below refer to the 2018 festival. However the reasons to attend are still legit. Click here to get all the updated details on the 2019 People Matter Fest.

In a city like Miami, music festivals come and go frequently, but often they take place in tourist- friendly locations. These major events rarely happen where the working class locals actually live and play. With the People Matter Festival that is all changing by giving Liberty City it’s first free Hip-Hop music festival. Radio veteran and the host of 103.5 the Beat’s afternoon drive show, Papa Keith, saw the need to bring a world class event to a community that is often neglected on many levels. The nationally syndicated radio host has teamed up with Miami-Dade County Commissioner Jean Monestime to produce a memorable community event that will have everyone in the county talking.

ThePeople Matter Fest is a vehicle from the radio host’s “Papa Keith 4 People Matter” or #PK4PM millennial movement and social media campaign. If you’re not sure what to expect at this year’s People Matter Festival, don’t worry. We’ve given you six reasons you need to have your butt at Gwen Cherry Park on June 16th.

1.Rick Ross and Trick Daddy’s live performances will be Lit

Set to hit the stage is the Biggest Boss Rick Ross and the “Dade County Mayor” and legend Trick Daddy. The two are known for giving exciting performances with surprise guests. Although it’s not confirmed, we couldn’t see the two hometown hero’s not bringing some special guests to help them show out in front of the Liberty City audience. An honorable mention goes to the rest of the performers, most of which are from or reside in South Florida. The line-up rivals that of major branded music festivals like Rolling Loud and includes acts like Zoey Dollaz, City Girls, Kent Jones, Brianna Perry and Mike Smiff and more. (Full Line up below.)

2. This is a FREE music festival

If you’re from Miami, you know all too well that damn near everything has a cover charge. The organizers of this festival wants to make sure you could ball on budget and enjoy a great family event or day out with your homies all for free. With a lineup like People Matter Fest’s one could easily spend a pretty penny to see those acts. There will also be free hair cuts and a DJ Battle by Captain Crunch from the Sugar Hill DJs, and Boda Luva from Pure Funk DJs. Although, the food and merchandise vendors will be selling their goods (See reason 6 ;-), entry to the festival is totally free. While you’re there be sure to thank Papa Keith and Commissioner Monestime for being nice to your pockets.

3. There’s a Countywide call for a 24- Hour Cease Fire

For one day the event organizers are asking everyone in the county to put your beefs to the side and put their guns down. Unfortunately, Miami-Dade county is no stranger to senseless gun violence and in Liberty City has been ground zero for many of those violent acts. The mission of this festival is to show residents that their lives do in fact matter and that they don’t have to lose or take a life. In exchange for a free music festival featuring many residents’ favorite artist, Papa Keith’s request is a simple ask. Last year this was accomplished in the Liberty City area and event organizers are looking to repeat that success across the country. If you need an extra reason to put your guns down, check out the video below from two teens who shared their stories with the #PK4PM team about dealing with gun violence.
https://www.instagram.com/p/BkBjBDNBb_A/?utm_source=ig_share_sheet&igshid=nqvqxyzehx5v

4. Your kids will lose it when they see the Kid’s Zone

Papa Keith looks forward to this aspect of the festival each year and calls is a mini- Disney World. He’s teamed up with local companies to produce a Kid’s playground dream come true, equipped with bounce houses, rides, rock climbing and so much more. Your kids can play and jump their little hearts out all for the free.

When you can bring in two world class professional athletes and staples in Miami sports, you know it’s real. Udonis Haslem will be on hand giving pointers and judging the Father and Son 3 on 3 basketball tournament, so dads and sons bring your A game. This tournament is cool because it intentionally honors dad during the Father’s Day weekend and gives dads a time to bond with their sons. Haslem has also partnered with sponsor  Metro PCS to also give a way autographed basketballs. You’ll have to enter their raffle contest, so get to the festival early so you don’t miss out.

The People Matter Fest can’t happen at an official NFL designated park and not have a football game. And no one is better fit to host that than former Miami Dolphins and University of Miami football star Bryant McKinney. The winner takes home trophies and bragging rights.

6. The Vendor Village is all about Supporting Black Owned Businesses

Papa Keith uses his platform via iHeartMedia every Monday on his radio show to give local Black and Brown entrepreneurs a chance to share their journey in their respective industries. The radio vet saw this festival as another opportunity to give local businesses a chance to share their talents with future customers. More than 20 vendors will be on site selling their items and you’ll be able to find some one of a kind pieces. Some of the food vendors include 305 a Taste of Miami, Food Dudes, Chef Plutoe Off the Wall, Popos Seafood, TLC Food Truck, VIBE 305, Kingston Delight, Fryhead Miami and Champ’s Icees. A special shout goes to Lovely’s in the City for being the official food sponsor of the People Matter festival and providing food for the performers, VIP guest tent and volunteers.

(Full Line up below)