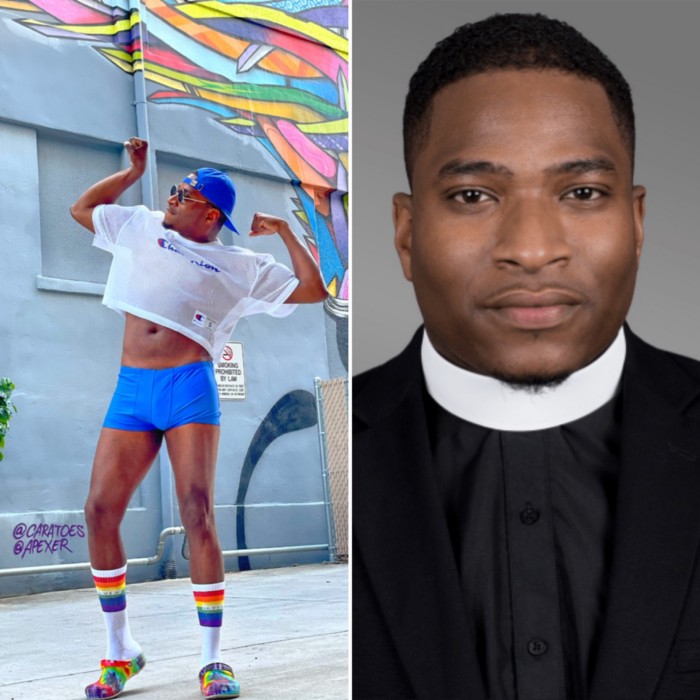 Faggot, fruity, flame… words that would scar me so deep that their weight still held space in my mind six years after coming out of the closet. In 2015, cutting against the grain of an entire culture, knowing all that I might lose, I made the brave decision to come out as a gay minister on TheRoot.com. Sparking international debate, my story entitled, “I’m Black, I’m a Minister, and I’m Gay”, resonated with millions of others who struggled to accept who they are.

When I first came out, I was deathly afraid of how I would be received in the world. So much so, that when my story hit the internet, I had a panic attack and could hardly breathe. Sitting in my room alone reading the comments on social media was even worse. “Burn in Hell, faggot,” “Go kill yourself,” “God doesn’t love you,” posted thousands of times written in different ways, all over Beyonce’s internet for the world to see. Though I was mortified, none of those comments really mattered because I had no clue who those people were. It was the words of those closest to me that impacted me the most. “You’re going to get AIDS,” “I don’t mind you being gay, so long as you don’t act like a girl,” “You’re not gay you just have daddy issues.”

Because of my love for those individuals, I still found myself trying to live up to their acceptable version of gay. There was still a little voice in my head saying, “Don’t be too gay,” “Watch your mannerisms,” “That shirt is too flamboyant.” It wasn’t until a trip to Hawaii at the start of this PRIDE month that I realized I wasn’t truly free as I supposed. I was still running from the words that taunted me my entire childhood. I was so worried about being accepted when I came out, that I adopted another false persona just so that the people I love would still love me.

It was through a great deal of self-reflection that I realized my entire life, I was taught to hide certain parts of me. Hide the gay Ben, the feminine Ben. Put the queer Ben away. Not loving and accepting all parts of my queerness has impacted all parts of my life.

I’ve been trying to get people and lovers to choose me, but I still hadn’t chosen me.

Still embarrassed to tell a random girl hitting on me that I’m gay. Still nervous to reveal to a room full of straight identifying men that I’m gay. Still trying to find a masculine partner that would be acceptable by mainstream society. Still afraid to be my full self in front of my family. Still embarrassed to embrace the fullness of my queerness. Whatever that still maybe….

Well today I am finally free from the shame, embarrassment and even rage that had me bound. Today I choose me, ALL OF ME — the masculine, the feminine, the in between. Today I reject heteronormative posturing and pick up the Ben that was dropped so many times. I pick up the Ben that was told to die. The blessing / curse of coming out is that you never stop coming out. As we grow and change and reach a newfound understanding of who we are, we come out all over again. Therapist Alan Downs calls this phenomenon the Birth of Authenticity.

Downs’s self-help manual called, The Velvet Rage: Overcoming the Pain of Growing Up Gay in a Straight Man’s World, outlines the underlining and inherent shame that comes from parental rejection and/or growing up gay in homophobic spaces. The anger that comes from constantly trying to present an acceptable you that gets rejected is what Downs has coined “velvet rage”. Our anger and our shame causes us to overcompensate and try to earn love and acceptance by being the best, better than others, and exemplary — trying to become someone we believe will make us more acceptable and loved.

Though the book is mostly focused on the privileged white gay male experience it rings true for most of the LGBTQIA+ community. According to Mental Health America, LGBTQ people experience mental illness at three times the rate of the non-LGBTQ population. LGBTQ youth are four times as likely to attempt suicide. Rates are even higher for trans and gender-non-conforming folks. These higher risks are linked to stigma and misunderstanding of LGBTQ people, even in a post-marriage equality U.S.A.

Once we face this shame and rage and overcome the stigma attached to being queer, we step into the birth of authenticity. We are free to discover the parts of ourselves that were hidden away, shamed away, beaten away, or prayed away. Most of us don’t even realize we are responding to hidden shame. We numb the pain of parental or societal rejection so deeply we do not even realize it is running the show.

Downs points out that the lack of any authentic validation, especially from a parent, results in destructive “velvet” rage. It lives in the silos of our psyche, nurturing seeds of unconscious self-hatred that manifest in so many ways: careless sexual choices, substance abuse, financial abandon, undisciplined career, self-sabotage, numerous short-term relationships, ignored opportunities, etc. Depression often rears its ugly head when life is good because deep down, we don’t believe we deserve it.

Right now, I am in a season of unlearning. I’m undoing 30 years of hiding, shame, anger, and self-hatred. I’m doing away with the words, habits, behaviors, and even people that cause me not to choose me. A friend asked me what choosing me looks like. At first, I had no idea but then I realized I started choosing me when I decided to pursue everything I didn’t simply because I was gay. For instance, this year I became a member of the world’s first Black collegiate fraternity, Alpha Phi Alpha Fraternity, Inc.

The one thing I wish I would have done and that I now recommend to everyone is, go to therapy before you come out. In 2015, coming out exposed my truth but I had no time to process the internal rejection and remove the internal voices that were telling me I was unworthy. I was out and proud but still being governed by the shame of being gay.

This pride month and forever, lets all do some collective unlearning and restore our confidence in who we were created to be from birth. Becoming who we really are and loving that person is a journey. I am yet on my way to being my real authentic self and invite everyone to join me on the journey of discovering and loving the real you.

This journey of self-love was the last piece I needed to complete my book that is in its final stages. I’m looking forward to sharing my full story with the world. Pre-order your copy at www.imfreeforme.com

Benjamin is an activist and actor. He co-founded BMe Community and is Chief Equity Officer of Friends of the Children. Proud Alum of Florida A & M University. This article was originally published on Medium.com and written by Benjamin Carlton.