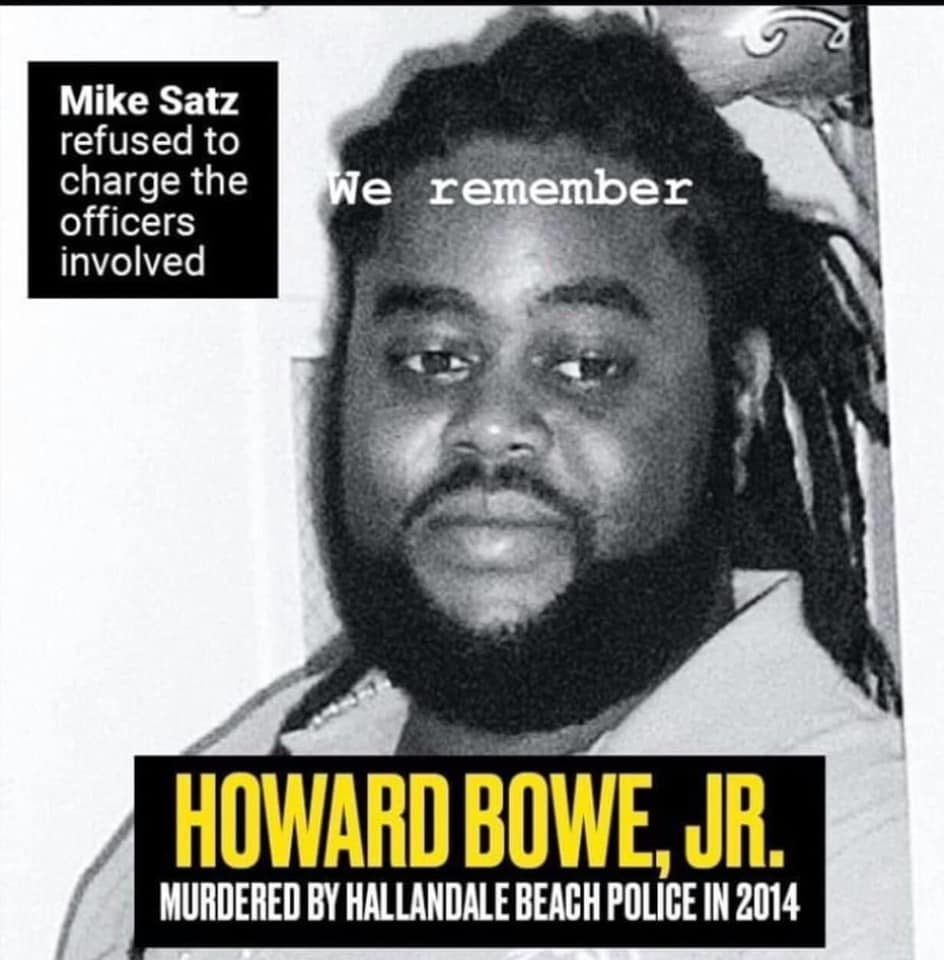 I need y’all to understand how deep this situation with the Hallandale Beach Swat Team is. In 2014, Hallandale Beach SWAT killed Howard Bowe Jr. in his kitchen. Bowe was unarmed and in his underwear when SWAT entered his home in a no-knock SWAT raid, just like what happened to Breonna Taylor on March 13th. The SWAT team also killed his dog, and detained his minor son. No officers were charged and nothing changed as a result.

The current mayor, one commissioner, and police chief who was a lieutenant at the time of the murder are all still around, and they decided the process to investigate Bowe’s case. Sabrina Javellana (the current 22year old Vice Mayor of Hallandale Beach, who was in high school at the time of this murder) spoke at the 2018 commission meeting (before she got elected) telling them that a payout to his family in their lawsuit was not justice and they need to acknowledge him rather than try to sweep it under the rug.

WE NEED TO STAND WITH HALLANDALE BEACH VICE MAYOR & RESIDENTS AND DEMAND JUSTICE BE SERVED! The Officers need to be fired and arrested, the Police Chief needs to be replaced, the Mayor & Commissioner who were there when this happened needs to be Voted Out! SABRINA NEEDS TO TAKE THE LEAD OF THE CITY ASAP!
WE NEED TO ALL HELP HALLANDALE BEACH AMPLIFY THEIR VOICES UNTIL SOMETHING HAPPENS!

According to Business Insider, the Hallandale Beach Police Department SWAT team recently resigned due to Vice Mayor Javellana speaking out against their murder of Bowe in light of the death of George Floyd. She said that they couldn’t decry the actions of the Mineapolis police who murdered Floyd, without looking into their own wrong doings.

“The City Administration has shown a clear disdain for our agency,” the officers wrote in a memo first reported on by local television network CBS12, singling out Vice-Mayor Sabrina Javellana.

“She has actively protested against us,” they complained. “She has shown that she takes pleasure in besmirching the hard work and dedication of the members of this professional agency, having the gall to compare us to the Minneapolis Police Department.”

This Op-Ed was written by Ernisha Randolph. Ernisha is the owner and CEO of the Sweet Butter Group and an advocate for Black Business and Social Justice.