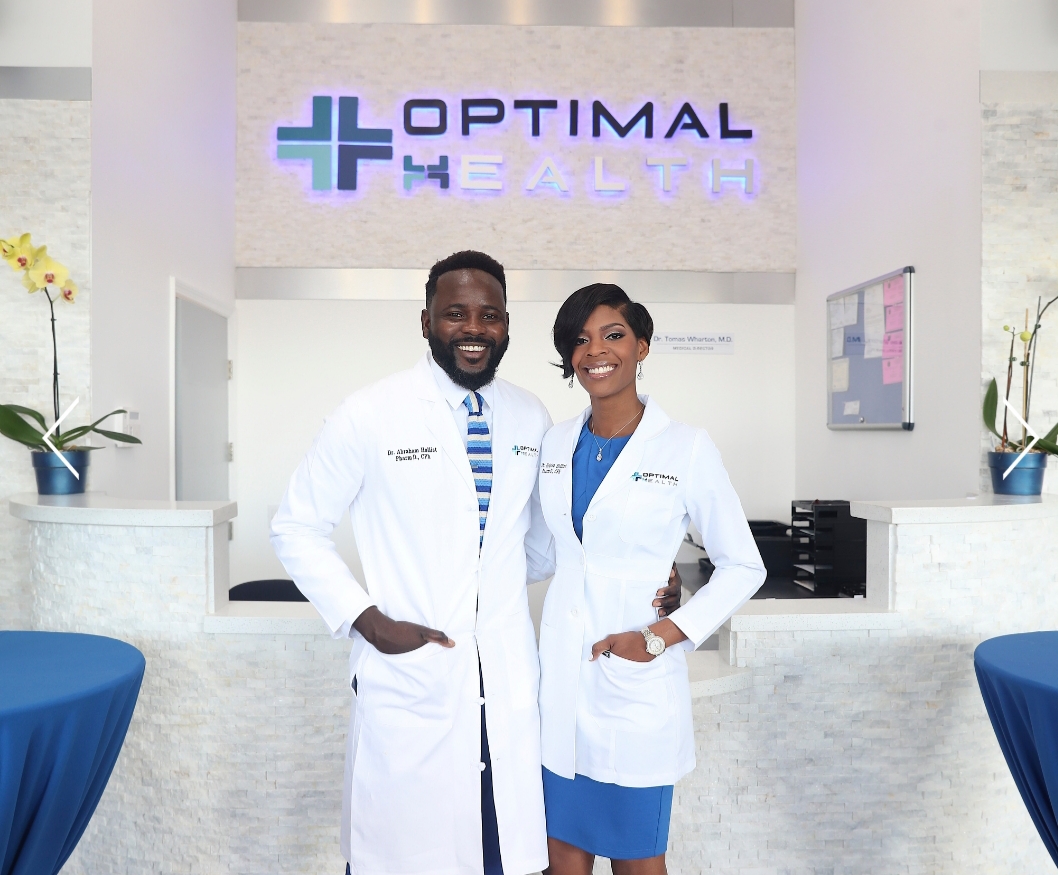 Two Miami Gardens based doctors are on a mission to lower new STD and HIV cases. Husband and wife duo, Dr. Abraham and Dr. Kristen Hollist, launched the PrEP program at their new state of the art facility, Optimal Health Medical Center . The two millennials and Howard University Graduates, want people to know their medical facility is a place to come for free testing and treatment.

They will also test for other STDs which include Chlamydia, Gonorrhea, Syphilis and Hepatitis B and C.

To prevent contraction of HIV, the medical facility has PrEP to offer patients. PrEP means pre-exposure prophylaxis, and it’s the use of medication – a pill each day – to protect you from HIV. Dr. Abraham explained that Truvada is a prescription medicine that can help reduce the risk of getting HIV.

The doctors believe people are not informed about STD and HIV prevention resources and that new cases are on the rise for Blacks and Hispanics.

“We want to educate our community about the practices of safe sex and safe behaviors to reduce the risk of it because the rates of STDs are increasing including for Chlamydia, Gonorrhea and HIV. There’s even been a recent increase of cases of Syphilis popping up.” said Dr. Kristen. “And so we just need people to know, and this is across the board for all ages, men and women and regardless of your sexual orientation.”

“The group that is at the highest risk is Black men who have sex with men,” she said. “Black women’s risks have increased as well over the past ten years. There cases have gone up.”

Optimal Health will monitor kidney function through blood work to make sure that is not affected. However, according to a study reported by The Body Pro, Truvada does not affect your kidney. The Truvada medication has been proven to lower risks of contracting HIV by 92%. The Hollist’s believe that the stigma around the HIV prevention medication is causing people of color to not join that PrEP program, even though it can possibly save their lives.

Dr. Abraham said that new HIV cases for Black men and Black women are significantly higher than their White male and female counterparts. And even though Gay men of all ethnicities are still at the top for new HIV cases, Black women follow closely behind them with new HIV cases. According to the Center for Disease Control and Prevention, African Americans made up 43% of new cases, and Hispanic and Whites tied in at 26% of new cases.

“This isn’t just a male problem or a gay male problem. This is effecting all people,” said Dr. Abraham.

Dr. Abraham attributes education of prevention options for Whites is higher than that for Blacks. He notes that White gay males are more educated in ways to protect themselves and are more likely to take the PrEP medication. Their rates have been lowering where their Black and Hispanic counterparts have not.

The Hollist’s said people shouldn’t be concerned about having health insurance or expensive medical costs when coming to their office.

“We offer free testing services regardless of your insurance status. If they are under the PrEP program you can get testing for free,” Dr. Kristen said. “And we offer very affordable STD screening rates for people who are uninsured or if they can’t afford our rates we have the resources to direct them where they can go to get free testing or even to help them get insured.”

Optimal Health had its grand opening in March and started their STD Prevention program in May of this year. Along with providing affordable health care to residents in the surrounding areas, the two want to make sure they do their part to lower the chances of people contracting HIV and STDS. Which has had a devastating effect of low income communities of color.

“This is a preventable disease and our goal is to get rid of new HIV cases,” said Dr. Kristen Hollist.

People can get tested Monday- Friday 9 a.m. – 5 p.m. at their office located at 17235 NW 27th Avenue. The doctors, who also own the medical facility, said people can walk in anytime or call and set an appointment.

You can see Dr. Abraham and Dr. Kristen Hollist speaking about HIV prevention at the HIV/AIDS Senior Awareness event at Universal Truth Center in Miami Gardens on September 26th.