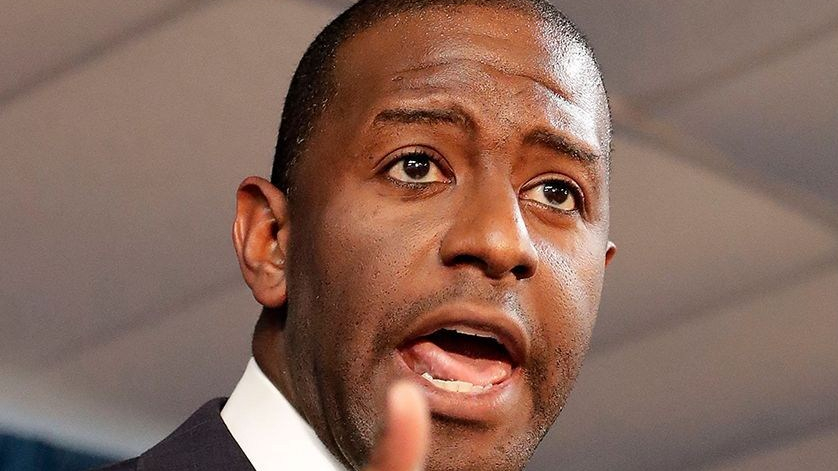 This gubernatorial election in my home state of Florida is one of the most exciting I’ve seen in my lifetime and definitely most historic. Tallahassee Mayor Andrew Gillum is the first Black man to win the Democratic nomination for Governor of Florida. He’s well on his way to moving into the governor’s mansion in Tallahassee and we’re so here for him to make history as the first Black Governor of Florida. His platform is progressive and includes a plan for all Floridians to live their best life (Word to Florida’s own Lil Duval).

This is America so there’s an obvious racial undertone coming  from some on the right about Gillum’s candidacy (I mean this is Florida *shrugs*). But if the world didn’t know before, after seeing Gillum in action they’ll know Black men from Florida aren’t pushovers and will keep it all the way 100 with you if you step out of line.

Gillum, who was born in Miami, raised in Gainesville and graduated from FAMU in Tallahassee, knows all too well how to put a disrespectful person in their place. And he didn’t fold while on the campaign trail when the opposition took unfair shots at him. Gillum’s clap backs have been epic, and he’s shown us he’s absolutely about that life.

Check out our top four moments from when Gillum kept it “G” af and showed us why he deserves our vote to become Governor.

Right after the primary election in August, President Trump tweeted about the Florida Election and praised the Republican candidate, who he endorsed, while also insulting Gillum. But Gillum’s epic “@ me next time” showed us for the first time the Candidate had the balls to stand up to the leader of the free world if he steps out of line. And we also appreciated his level of trillness in @’ing the president in his reply. Check out the Pure G-ness in the tweet below!

What our state and country needs is decency, hope, and leadership. If you agree, join us at https://t.co/fm0ODFFGWU. Also, @ me next time, @realDonaldTrump. https://t.co/59dQy8RLsm

During the Florida Gubernatorial  debate this month, candidates Andrew Gillum and Ron DeSantis squared off at Broward College in Davie, Florida. The most talked about clip from the debate came when Gillum shut Desantis down about his racist affiliation. He started by sharing a common Florida saying “a hit dog will holler” which means a guilty person will always showed an admission of guilt when they haven’t even been directly approached about a matter. Gillum then remixed a famous rap lyric and said “I’m not calling you a racist, but racist think you’re a racist.” Check out the full clip below and be prepared to laugh hard as Gillum thoroughly reads DeSantis for filth.

3. Gillum Told Trump Again To Chill With the Slick Rappin.

Floridians know all too well that Hurricanes are serious business. When one is approaching we try to prepare as best we can and help others who may need financial assistance so their not without essential items if the storm does severe damage. We are generally nice to one another and stay positive during this time. But I guess no one gave that memo to President Trump who came to rally for DeSantis in Orlando a few days before the storm was to hit Gillum’s hometown of Tallahassee, where he is Mayor. In true Trump fashion, he threw insults at Gillum, to which Gillum replied with a “Naw homeboy this ain’t a time to be playin” tone. Check out the tweet below that he again in trill form @’d the president.

Hey @realDonaldTrump — don't come to my state and talk trash about my city while we are preparing for a Category 3 hurricane. We need a partner right now, not a partisan.

During a CNN debate, Mayor Gillum had enough of Rep. Ron DeSantis spreading false information about him and he compared his opponent to his endorser President Donald Trump. Gillum told him that he “neglects all reason and facts” when it comes to crime in the state of Florida. Gillum demanded that DeSantis put some respeck on his name (word to Birdman). Check out another hilarious clip where Gillum straight verbally chin checked DeSantis for not telling the truth.

Gillum is not to be played with. We can’t wait to see him action in Tallahassee as the ultimate “G” aka GOVERNOR.

Comment below some other Gillum moments that you’ve enjoyed during his campaign that we didn’t mention.

Florida residents can vote for Andrew Gillum for Governor on election day, November 6th or they can head to an early voting location from now through November 4th. For information on early voting, click here.

To donate to Gillum’s Campaign and learn more about his platform, click here.

2 comments on “Ain’t Nothing But  A ‘G’ Thing: 4 Times Mayor Andrew Gillum Showed “The Right” He’s Bout That Life”