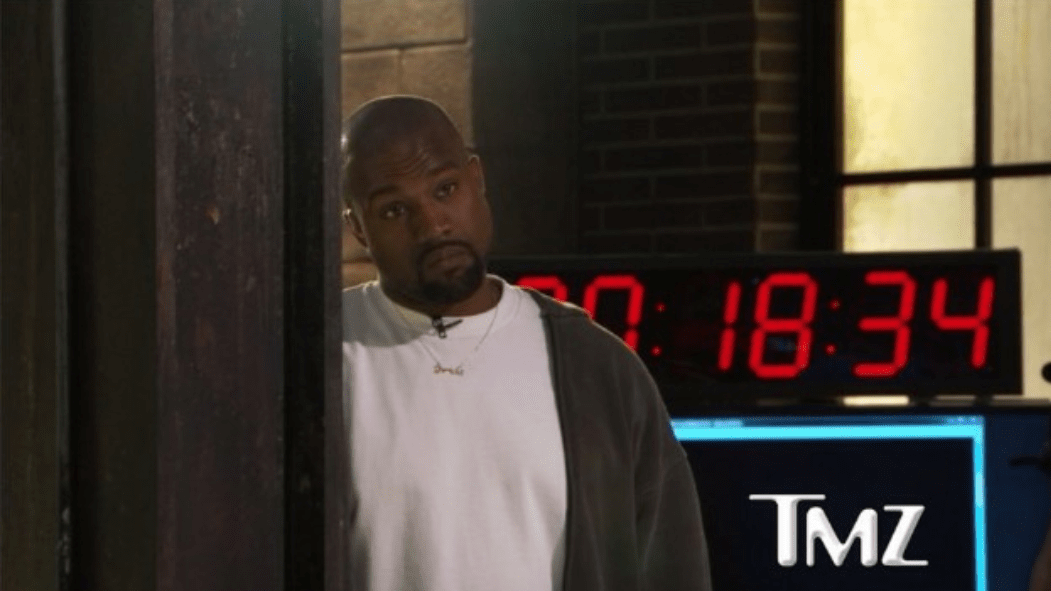 Kanye West has been Kanye’ing the past few weeks after seemingly to magically reappear from his year long hiatus from society. Ye’s break from the spotlight was caused by his hospitalization for a mental and physical breakdown (he calls it a breakthrough, watch his interview with Charlemagne the God for context).

Now, the genius artist has emerged from oblivion and professes his love for President Donald Trump via tweets and interviews and posted a picture of himself wearing a “Make American Great Again” hat. As if that wasn’t enough to piss off people disenfranchised by this current presidential administration, Kanye did a live interview with TMZ where he admits to be addicted to Opioids after having liposuction (blank stare). Then Ye went to a new super deep sunken place level when he claimed Black people had a choice in being slaves. He was immediately checked and schooled by Van Lathan from TMZ in true “Nigga what you doing?” fashion (see here).

Charlemagne, who’s interview with Ye actually gave us understanding of Kanye’s current mental state, gave his friend the Donkey of the Day for his statement on TMZ. But the true Donkeys are the Black people agreeing with Kanye’s view on slavery.

I’m not shocked by anything Kanye does at this point in life. I mean this is the guy who turned a gospel-esque song into a mega hit (Jesus Walks); said President Jorge Bush doesn’t care about Black People during live T.V. after the Hurricane Katrina government debacle and who snatched the mic from Taylor Swift during the MTV awards to say Beyonce had a better video than Swift’s (he was right tho, shrugs). Ye does and says what Ye wants and we’ve pretty much defended him and protected him as Black People. As TI said on the Breakfast Club this morning, he’s this generation’s Micheal Jackson. He’s a certified undeniable musical and artistic genius and we love him for that. We also understand that that genius may come off in a way that non-geniuses may not fully understand. And again Ye says whatever he wants. Trump is actually doing his best impersonation of Ye in my opinion.

But yall Black people agreeing with that mess he said about slavery need to check yourself. People are saying he means that black people stayed in slavery for 400 years and therefore chose that existence. Negating the fact that there was a system of oppression designed to stop slave rebellion. Mental and physical abuse were inflicted on those who rebelled for their freedom. Yes slaves in some states out numbered whites residents. However, they did not have the firepower or protection from the law to effectively fight back on a massive level. And Kanye’s stupid statement doesn’t take into the fact that people like Queen Harriet Tubman, Nat Turner, Frederick Douglass and countless others actually fought for their freedom and many succeeded. Slaves did jump off those ships to escape bondage (word to Eric Killmonger). Tubman got her freedom and instead of starting a new life, she came back and helped free hundreds of others. A male slave. Henry Box Brown, literally mailed himself to freedom. And there are countless, countless COUNTLESS of stories of black people being brave and innovative to gain their freedom.

I’m highly offended reading black people comment on social media that they would have fought back and been killed to get their freedom unlike the slaves of the antebellum South. That’s such a dunce statement. Depending on the state or county you were in, runways or slaves who fought back weren’t always killed because they were in fact property. Killing them would mean money was wasted. Slavery was a business y’all. Slaves who rebelled were tortured and deformed and set out as examples to the other slaves to not do what they did. And the successful rebellions were short lived because black slaves didn’t have the same firepower and manpower as the whites they were fighting (Y’all really need to watch Birth of a Nation and read up on Nat Turner).

There were kids who were born into slavery who saw their loved ones tortured for trying to escape and fight back. This oppressive lifestyle was all they knew. Imagine being a kid and seeing your mom or dad (if you were lucky enough to still have been with them both) tortured, bloody and beaten for trying to escape slavery. Do you really think you’d try to do the same as them? I’ll answer for you, Hell no! The mental effect would be damn near impossible to repair. Mental slavery was just as bad as physical slavery. It was the way slave masters kept control of their large amounts of slaves.

And y’all talking about fighting back slaves masters but don’t even fight the current system that oppresses Black People. I ain’t seen y’all at no marches, protests, voting booths or government meetings speaking truth to power. But yeah y’all Black ass and Kanye talking about slavery was a choice. What’s stopping y’all now from fighting the system? I’ll wait.

I’m very hurt to see some of y’all think black slaves were punk ass people who laid down easily. Naw, don’t ever fix your mouth to insult the ancestors that way. You stand on their bruised beaten shoulders and have the blessed life you live. You sit behind a screen displaying your digital activism that requires damn near no effort, but think you’d be brave enough to fight a mob of angry armed white men by yourself. Tuh.

Be grateful that you are a descendant of the Black slave, who despite their existence knew that you could exists in the world we’re in today and that you could enjoy the freedom they could only dream of.

You have to fully understand slavery before you can even think Ye was right. And a part of me thinks Kanye ass knows more about slavery than he’s proclaiming to know. This man made The College Dropout and that album dropped so many dope lines about race relations that I can’t allow Black people to side with him on this…. Black people we owe it to the ancestors who lost theirs lives to honor them better than this.

2 comments on “Not Shocking Kanye West Said Slavery was a Choice; Black People Agreeing With him is the Shocker”