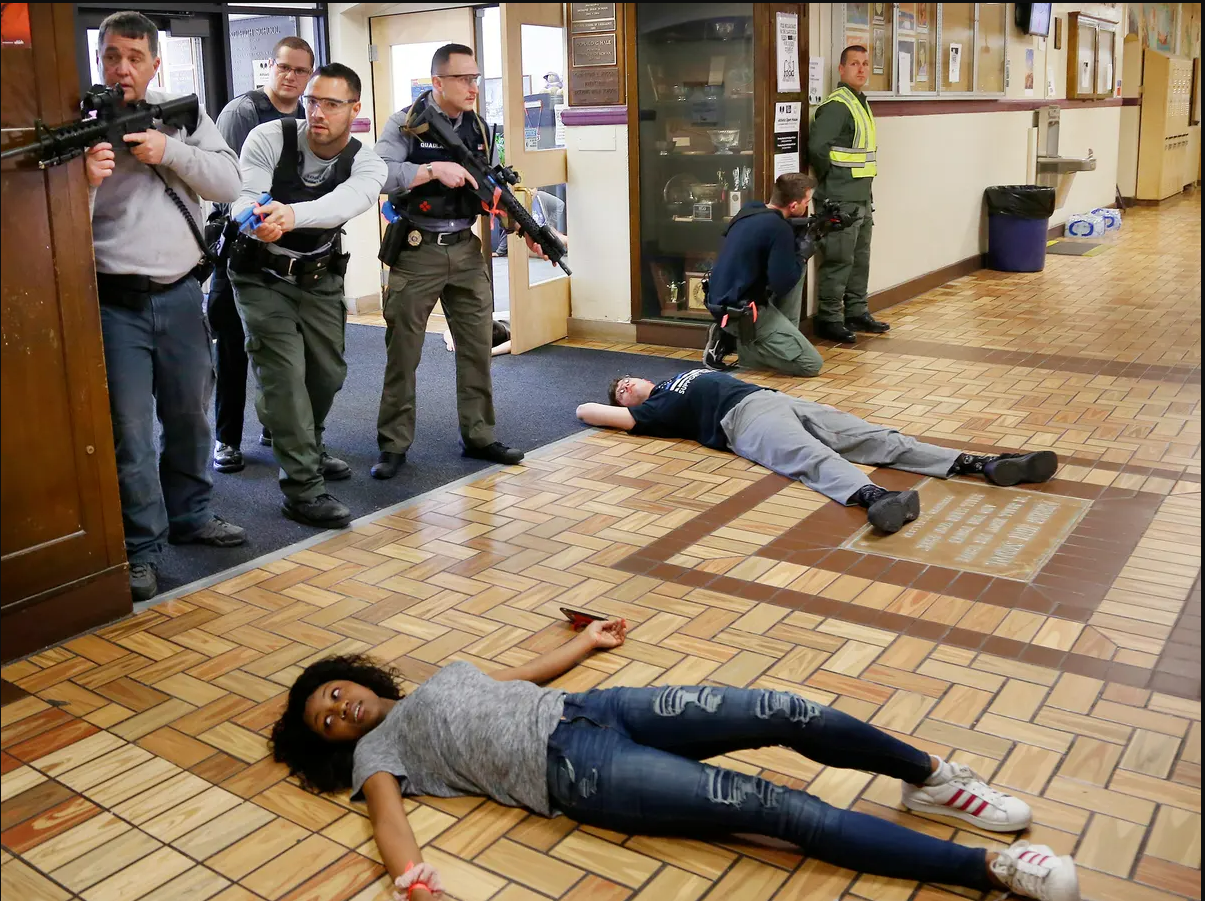 It was November of 2011 at Arcola Lakes Elementary School and a 7-year-old me was minding my business in math class. Suddenly the loudspeaker is on and my principal says “This is a code red. I repeat code red.” At first, I thought it was just another practice, but then my teacher starts sweating and rushing to turn the lights off. From there my 7-year-old mind guessed it was something serious. We hid under our desks and waited for 10 minutes. Some girls were crying, praying, and others remained quiet. Out of nowhere shots fired and a girl whispered, “Oh my gosh, I saw someone.” Because of that, my teacher panicked. She placed all of us in the classroom restroom, putting the girls on the right and the boys on the left. Ten minutes passed, then 20 minutes passed and then that 20 turned to 30 and that 30 turned to 40 minutes. All of us just stood there, some squatting, quietly in the dark until that loudspeaker talked again. That was my first time experiencing a shooting of any kind. At the time I didn’t know what to think or even say. I knew my dad was panicking and my mom was rushing home from work. I guess I never really processed the event. Not even now I do fully grasp the trauma of that event that happened when I was just at 7-years old.

Unfortunately that would not be my only encounter with a school-related shooting. The second time was at the same school, but it was a field day in April 2012. Seven-year-old me was so excited to play. I planned out what I was going to do first: Jump rope, Potato sack race, Relay race, and even a three-legged race. Sadly I never got a chance to do some of my favorite events that day because a staff member reported that they witnessed a gunman jumping our school gate. The teachers rushed us inside and we had to wait about an hour for the situation to settle down. I was furious. I thought to myself, “Who does this guy think he is messing up my field day?” I would have thrown a pebble at him. That was all I was focused on, some man ruining my field day and not the fact that he had a weapon and could have harmed one of us. I never processed that properly either at the time. The ramifications were lost on me as a 7-year-old as it would anyone at that age.

Thinking about those situations I experience now in 2022, it’s really sad because the occurrence of school shootings has not gone away. I was 7-years-old then, and now as a rising senior in high school I still hate that this is a really dangerous thing I have to deal with. Like at this point my brain can’t process the hostile back-to-back shootings that have happened in recent years. I think it’s ridiculous. It’s like a disgusting trend that won’t go away. I have no words for how I was a baby, a child, a kid who thought the boogeyman was real and the scariest thing I would encounter until I saw the real fear of school shootings. I see these shootings and keep reminiscing how I felt as a scared kid at 7 years old hiding in a bathroom and I think how horrified those students must have felt experiencing the Parkland shooting, the Uvalde Shooting, the Sandyhook shooting, and unfortunately all the other school shootings.

I thought by now, we would have tougher laws and restrictions that would help to prevent school shootings. However, it seems to me the government leaders haven’t done much and school districts are sadly forced to adjust their rules and procedures to try and prevent these horrific incidents. No one should have to adjust their lives to try to prevent bad things like this from happening with little protection from a government that’s supposed to protect us. I wish these bad things would just vanish. I’m asking now the adult leaders of my local, state, and federal government why can’t access to machinery weapons change instead of schools taking learning time to practice shooting drills for such situations? Why is the focus of protecting unborn children from getting aborted more of a priority instead of enforcing restrictions or laws to slow down gun control to prevent the living children now from getting killed? What’s the point of overturning a case about babies if you can’t even handle gun control that will help prevent them from getting shot in their elementary school classroom? To me, I believe you’re just encouraging more children to die.

I would say at this point I feel numb to school shootings. It’s sadly become a typical routine in everyday life. Do you know how sad it is for a 17-year-old to say a hopeless thing like this? Shootings and routines shouldn’t even be in the same sentence. Yes, school shooting drills have made me more concerned about my surroundings, and I feel like everyone should, but not for this reason. According to Chung, school shootings develop anxiety, post-traumatic stress, and even depression in young adolescents and young children. This just encourages me to protect myself more. I even want to buy a taser and pepper spray, but again I shouldn’t have to focus on this. The adults who lead this country should want me to focus on the normal things a high school senior deals with like college prep, senior activities, high school football games, and making lasting memories with my friends. I should not be concerned with arming myself just in case a crazed gunman decides to shoot up my school. But this is my reality.

I honestly don’t even think my school is prepared for such a situation. My school is literally on a college campus. That’s open to everyone and everything. We do practice drills but I don’t think it’s effective, especially since we are in a post-Covid-19 world. How are we supposed to keep six feet if we have to bundle up together in a corner of a classroom?

I believe it is nice that my school and others offer a mental health support system, what about the school shooters themselves and their mental health before they decide to shoot a school? According to The Long-Term Psychological Impact of School, the site reported that the University of California has improved its emotional support system but still is concerned about the deeply troubled young men carrying out attacks So even if there is help for the victims, what about the attackers? What about helping the attackers before they shoot up a school rather than reacting after the fact and lives are lost? What about the shooters that proclaim they are mentally unstable? I believe some people lie to get out of trouble and I think some criminals try to escape any penalties by pleading insanity. In my opinion, some of these school shooters who claim they don’t have the right state of mind are just trying to escape the penalty they have to face. Cornell Law School states that pleading reason of insanity is the equivalent of pleading not guilty. Not only are they abusing this choice but mocking the mentally unstable.

Even though I believe the government has not done anything significant to fix this matter, I do understand change will take time. However, I just feel like the process is still too slow. I want to see big changes now, not in ten years. But everything has a process. I find some solace in the fact that at least President Joe Biden recently passed a bipartisan safer communities act that “bans assault weapons” and “requires background checks” for all gun purchases. It’s the first step to a big issue. I am hoping that this could help decrease school shootings and decrease the mental health problems kids and teens face as a result of experiencing them. I just hope that in the meantime while the leaders of our country figure gun control out, the day never comes when I have to hide in my school’s restroom again in fear that my life might end at the hand of an active school shooter.

0 comments on “Opinion: 17-Year-Old Recalls Traumatic Incident With Active Gunman at School; Makes Case On Why School Shootings Laws Should Do More to Protect Students”