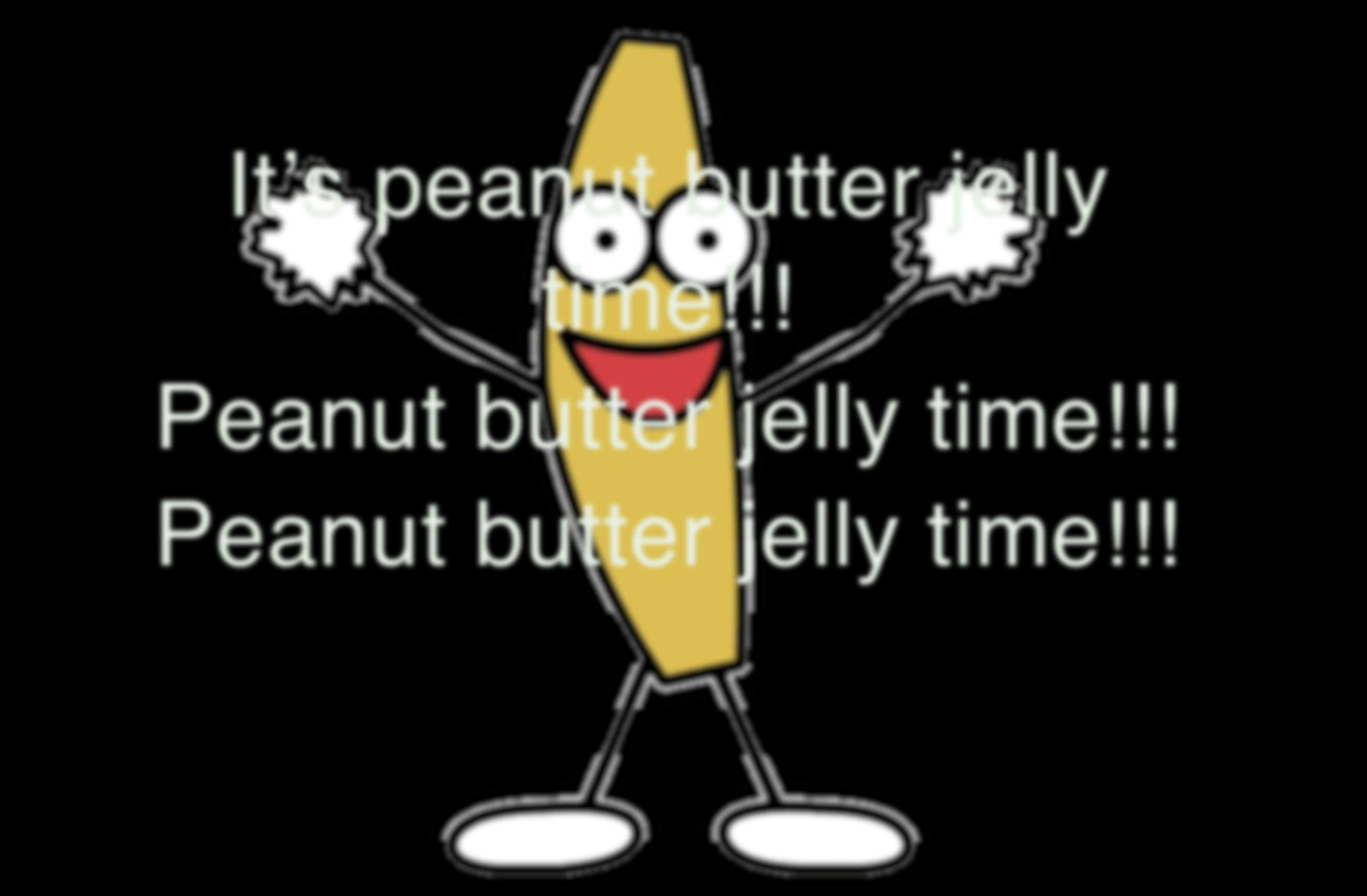 Based on the most widely circulated version of the OG “Dancing Banana” meme on YouTube, animator Alexander Zakari (Z LA) brings a gritty, Lo-Fi, User-Generated aesthetic that takes us back to the simpler days of the nascent birth of internet meme culture.  There are also two additional “305 Remix” versions of the NFT, with visuals by legendary Miami graffiti artist, Atomik. The remixes highlight the “305” native culture, representing the Magic City on the Blockchain and welcoming visitors and new transplant neighbors to the party!

The popular PBJT meme is a flash animation that consists of an animated Dancing Banana character and the “Peanut Butter Jelly Time” song.  Known for being both obnoxious and funny, the Dancing Banana video became a hit in the early 2000s, leading to PBJT-related merchandise, dozens of parodies, and tribute videos on YouTube.  Ryan Gancenia Etrata and Kevin Flynn created the original Dancing Banana flash animation under the screen names RalphWiggum and Comrade Flynn. They posted it to the Off-topic forums in early 2002.

On March 21st, 2002, a new grounds user, YrebWarts, posted Etrata and Flynn’s work on the popular Flash gallery site, where the clip became wildly popular, spawning many remakes.  By November 13th, 2002, Peanut Butter Jelly Time made its debut into the mainstream media when popular NBC sitcom “Ed” portrayed the main character watching the flash animation in Season 3, Episode 7 entitled “The Wedding.” Over the course of 2003, the first two flash animations made the rounds across internet humor sites and message boards, such as eBaum’s World, Something-Awful, and Albino Black-sheep, among others.

The meme once again broke into mainstream network television on November 20th, 2005, when it was referenced in “The Family Guy” in Season 4, Episode 16, titled “The Courtship of Stewie’s Father.”  In the episode, Brian the dog performs his own rendition of Peanut Butter Jelly Time, dressed as the dancing banana and shaking maracas.  Indicative of “Peanut Butter Jelly Time’s lasting legacy on the online video culture. There are dozens of derivative videos, including remixes and mashups, available on YouTube, accumulating over 400 Million views.

“The Peanut Butter Jelly Time is one of the most iconic memes of all time,” said Crypto.com Executive Vice President and Global Head of NFT Joe Conyers III. “We’re honored to partner with Slip N Slide Records to offer this symbol of internet culture during the aughts on our platform, which has been so heavily referenced time and time again since — and to be able to bring it forward for a new generation with a legendary artist like Atomik is an incredible bonus.”

Slip N Slide Records was founded by Ted Lucas, a 25-year veteran of the music business.  Mr.  Lucas has spent the majority of his career as Founder and CEO of Slip-N-Slide Records, where he discovered, signed, and developed Platinum-selling recording artists such as Trick Daddy, Trina, Rick Ross, and Plies. Mr. Lucas has maintained successful long-term partnerships with entertainment conglomerates such as Warner Music Group, Universal Music Group, and Sony Music Entertainment, generating sales of over 30 million albums and over 5 billion digital audio and video streams.

Mr. Lucas is also the founder of First-N-Gold Publishing, a publishing company with a catalog of 300+ music songs. He is also the founder of Boss Man Management, an independent music management company. The Florida Bar Association’s Entertainment & Sports Law panel presented him with a prestigious Tom Dowd Lifetime Achievement Award.

Mr. Lucas also has deep ties to the Community of Miami-Dade, having founded the Ted Lucas Foundation, a non-profit organization aimed at helping youth in Miami’s inner cities improve their academic skills and explore their God-given talents in their dream pursuit. He believes in strong civic engagement and is always on-call to support forward-thinking leaders in Miami-Dade County for community enhancement projects.  For his business and civic work, Mr. Lucas has been awarded The Keys to the City for Miami-Dade County and The City of Miami Beach.

Atomik is a 100 percent Miami, visual artist.  Born and raised in Miami, formally trained in graphic design, Atomik has cemented his cred as a Miami street art scene pillar. The graffiti legend, part of the infamous MSG crew, has been blessing the Magic City with his unique art style for over 20 years.

Famous for his iconic Orange character, Atomik’s playful and colorful letter style has become as much a symbol of Miami as its palm trees or neon lights.  His unmistakable Orange character has been placed all over the world, bringing a piece of Miami to collectors in places such as Argentina, Brazil, Chile, Colombia, Mexico, Peru, England, Germany, Holland, Italy, Spain, Australia, Korea, and Thailand.  His studio pieces on media ranging from canvas to paper and objects like street signs directly reflect his street work and usually feature his ubiquitous Orange character.

Crypto.com NFT is a carefully curated platform for collecting and trading non-fungible tokens by creators, celebrities, and brands from the worlds of art, design, entertainment, and sports—including the Aston Martin Formula One Team, Beatport, BossLogic, Boy George, Diego Perrone, Lega Serie A, Lionel Richie, Mr. Brainwash and Snoop Dogg, among many other high-profile artists and clients. Established in March 2021, Crypto.com NFT is powered by Crypto.com — which serves over 10 million customers with the world’s fastest-growing crypto app, the Crypto.com Visa Card, the Crypto.com Exchange, and the Crypto.com DeFi Wallet.

More information is available at Crypto.com/NFT.