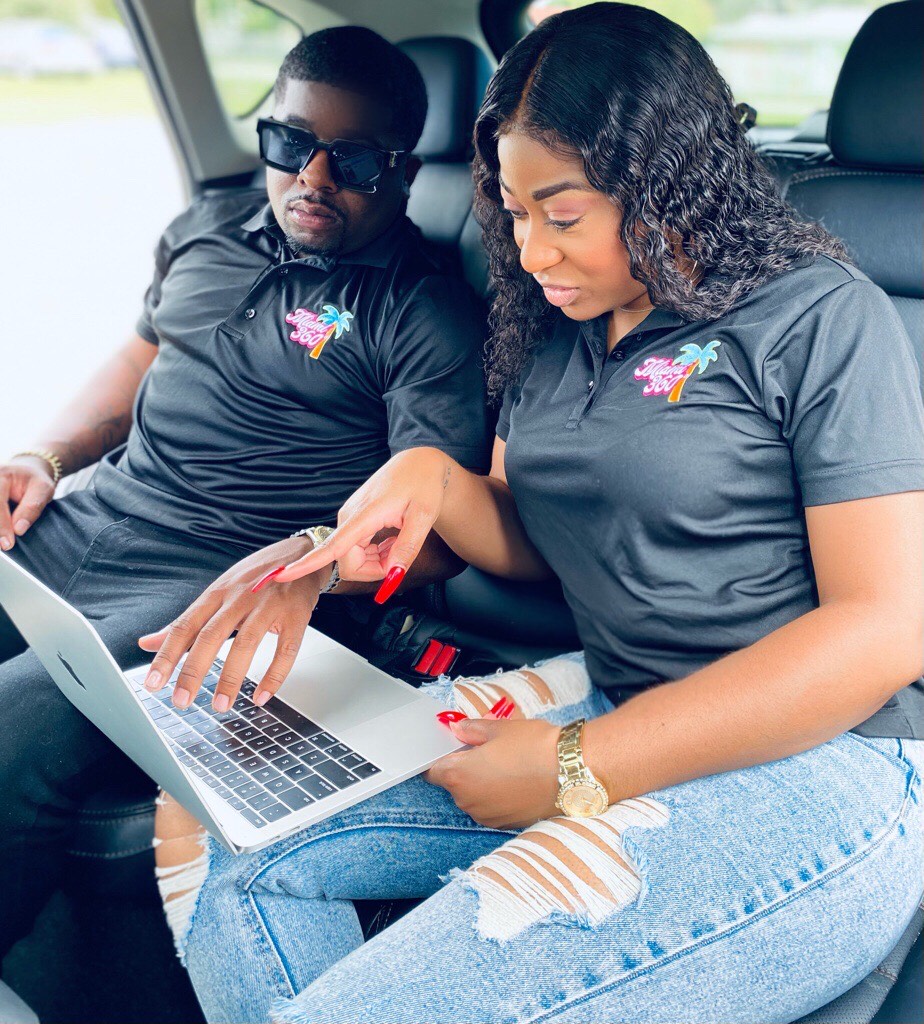 This article was originally published for Refresh Miami‘s Black Miami Professionals in Tech Series in partnership with Hy-Lo News.

After years of being asked to recommend places to go to visiting family and friends when they were in town, Joi Elmore had the idea to put those recommendations in one place so she didn’t have to be a personal tour guide anymore. From being her loved ones’ personal 411, she birthed the Miami 360 app, which is a directory that features local restaurants, shops and events that tourists visiting Miami might not know about. Last year Elmore enlisted her former Miami Carol City Senior High classmate, Alex Gardner, to help her bring her app to life.

The two of them (pictured above) have been working closely ever since and held a soft launch of their app in January. The app creators are eager to reach the many tourists that enjoy South Florida. Elmore and Gardner want to give tourists a true authentic scope to see Miami — their Miami — with locals being their personal tour guide. Although the two do not code, they used Buildfire to host their app. Elmore handles all the designs and content aggregation while Gardner handles sales and marketing. The two said together they are the perfect match to bring this app to the market.

Elmore and Gardner shared with interviewer Janey Tate their mission for the app and why it was important for them as Black entrepreneurs to enter the tech industry.

The conversation has been edited for clarity.

Janey Tate: Why did you guys decide to create the Miami 360 app?

Joi Elmore: Being from Miami, and Janey you probably can relate, we always would get calls from people coming to town wanting to know where this spot is and where that spot is. So I didn’t want to be a personal tour guide anymore. I wanted to give people an app — since everyone’s always on their phones — to look at the hot spots, look at the new spots, Black-owned spots, things like that so they’re not only doing the tourist type of things. A lot of people when they come down to Miami, they have this misconception that it’s just strictly South Beach and that they have to do all the expensive things. They are broke going back home because they didn’t know about the local spots that cost less but are just as fun. They don’t know about the mom and pop spots. They don’t know about the small businesses in South Florida. So we wanted to give people access to that. I wanted this app to give the vibe of the locals being your tour guides. We lean on our users having their ears to the street, so that we’ll always find out what’s new and what’s popping in South Florida. He’ll [Alex] be out and hear about someone opening a new restaurant. We’ll go check it out and list it on the app. We try to give everybody the most up to date and current information with our content in the app.

Janey: I love this story. I guess to back it up a little bit, what is the Miami 360 app? Like If you were doing your elevator pitch or you were trying to explain to someone what your app is or the feel or the vibe of your app; how would you guys describe it?

Joi: I would say it falls under the tourism industry. However, it’s not like a traditional tour guide pamphlet that people used to have back in the day. I would say it has more of an urban feel. It’s definitely a newer feel because it’s in an app. It hasn’t been done before other than Yelp and things like that, but even with those apps who I would say are pretty much our competitors, they don’t give you the real inside scoop. They don’t give you videos. They don’t give you Instagram pages that you can click on right there in the app. But we wanted to give people a more hands on feel. We want people to use the Miami 360 app and have a deep understanding of a business so they really know where they’re going. And although our app looks a little bit like Yelp, that app has a variety of businesses but that’s because they are charging people to be on the app. But Yelp doesn’t have all of the small places that we locals know about that I know tourists don’t know.

Janey: OK. And how does the app work? So I download the app and then what happens?

Joi: The app is free to download. Yes, and you do need to register once you get on the app and that allows us access to your information so we can stay in contact with users, but we are not invasive. One of the coolest things about our app to me is the fact that we have access to push notifications. With marketing and sales, being able to push messages to users within seconds will help us to stay competitive. Our goal is to have a lot of businesses that want to be featured in the app. Eventually we want to launch a monthly subscription for businesses so they’ll have access to our app to market and advertise their business to our users, which we aim to be in the thousands. We want to give local businesses access to people visiting town that they probably wouldn’t be able to access.

Janey: Alex, what do you want people to know regarding the formation of your company?

Alex: She pretty much laid everything out on the table. But I always tell people that everybody doesn’t want to go to South Beach. They want to know the Shukin & Jivin, they want to know the Finger Lickin, they want to know little small spots where the food may be a lot better than places on South Beach. Or they don’t want to spend one hundred hours on the [Ocean Drive] strip when they can go somewhere else and get better food where the locals eat at. That’s pretty much the purpose of the app. You know. making you feel like a local rather than a tourist and doing all the stuff that people in Miami do on a daily basis.

Janey: Make you feel like a local — that’s what’s up. I see that’s something that a lot of people are doing when they travel. I know I personally do it every time I go to a new city. I try to go outside of the main tourist area and try to go find a Black-owned business or a local business that’s off the beaten path. It’s cool you guys are creating a guide for people to do that in Miami. With that in mind, why was it important for you as Black people to join in this tech boom? Because a lot of us don’t really participate. So was that something that you guys had in mind? And can you speak to the importance of that?

Alex: The fact that we can do it too and participate in this industry is the importance to me. A lot of people from where we’re from, they’re not into this. So there’s a whole bunch of room for us to get in, share what we learn and invite other Black people to join. I think a lot of people might be scared to do it. Honestly, I think we’re kind of breaking the surface by doing this because I don’t really know anyone in this space creating apps. Because of that, I thought this was great and I was on board.

Joi: Once I actually explained to him the vision for the app, he was all on the board. But the creation came from my mind but just not stopping. I knew I wanted to create an app, but I didn’t know what direction we should take. So I always feel like before you start a new venture, you need to know what the problem is so you can actually have a solution. The problem I wanted to solve is people don’t know where to go when they visit our city and they want to know the inside scoop, so let’s give a solution to that.

Janey: I like that, and Joi, it was more like you had the idea and then you brought Alex in as a co-founder.

Joi: Yes. Alex is definitely my right hand man with this because I don’t have the time or the energy or capacity to go out and get contracts and talk to people and do all of that. And he is definitely that person. He is that person that can walk in and everybody knows his face. Everybody knows his name. He’s going to get the meeting done and the deal signed, and that’s what I needed to bring in businesses to be listed on the app. That was the only component that I was missing in this venture for sure.

Janey: In addition to having listings, are you curating news and content about South Florida?

Joi: Yes. We don’t care what it is, if we feel like it’s something interesting we feel like anyone coming in can benefit from; then we will share it. Also, our next step will be implementing audio and MP4 capabilities so that we can start releasing music artists, Miami artists that want to promote their music to our audience. Artists will be able to subscribe and get their music played for 30 days or longer.

Janey: How do people sign up? Is it for Apple and Android phones?

Janey: And how many users do you guys have now?

Joi: Currently four hundred. And the crazy thing is we haven’t done any advertising or marketing so that blows my mind. I guess people are curious. But we plan to roll out a full marketing plan with commercials and digital ads.

Janey: Wow, that’s awesome. Y’all’s SEO must be on Point.

Janey: Joi, what’s your professional background and where are you from?

Joi: I am from Miami, but I have lived in different places abroad. I came back home to Miami 2013. My professional background is in healthcare. I’m still currently in corporate America as we speak, but I’m getting out of that soon — I’m claiming that. Also, I’ve been an entrepreneur since 2017. I have a hookah catering business, online store and I help my daughter run her own slime business. As far as entrepreneurship, I knew that it was going to be something that I was going to do, but I could not have told you over a year ago that it would be anything dealing with tech. I don’t consider myself a tech person.

Janey: But it’s interesting because people like you have the creative side of creating a tech company and they just need help to execute. Alex, tell me about your professional background and where you’re from.

Alex: I’m originally from New York City. I finished high school at Miami Carol City High School. That’s when I moved down to Miami. I’m an artist, a songwriter, producer, a fashion designer. I own a clothing website. I’m a financial adviser as well. And of course, now app developer of Miami 360. It’s a long list of things, you know, but I’m trying to get to it and be an entrepreneur.