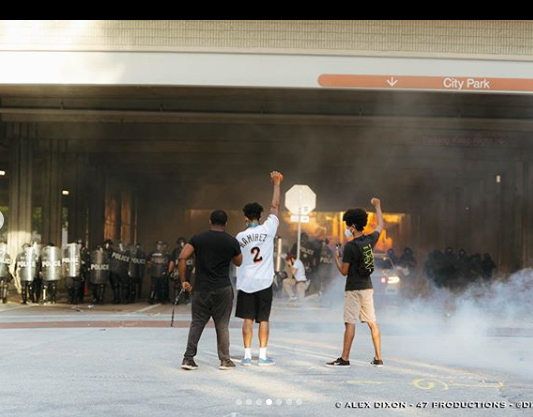 There were peaceful protests planned Saturday in Miami to to honor the life of George Floyd who’s life was senselessly taken by cop, Derek Chauvin. Chauvin dug his knee in Floyd’s neck for more than 8 minutes; which ultimately led to him losing his life. The groups who planned Saturday’s protests were Southeast Save the Kids and and Some other groups out of Coral Gables who have an Instagram page called Protests Miami (INSERT SIDE EYE).

As we all saw on the news and social media how the protests in Miami-Dade and Broward turned sour and violent and ended with a city of Miami Police car on fire, protesters being tear gassed by police and looting happening on at the Bayside Marketplace. Note: Most of those violent rowdy looting protesters were non-black. Come to think about it it was non-black protesters in Minneapolis causing a rucus as well from video floating around social media. I wonder will they be called “thugs” too by mainstream media. I won’t hold my breathe. (See video below of protest in Miami).

The community has reacted to what happened. Get into their comments below– some insightful and some funny. But seriously, we all just want to make it home safely to our families.

0 comments on “South Florida Reacts to the Dade and Broward Protests: Some Insightful, Some Funny, Some Deep”