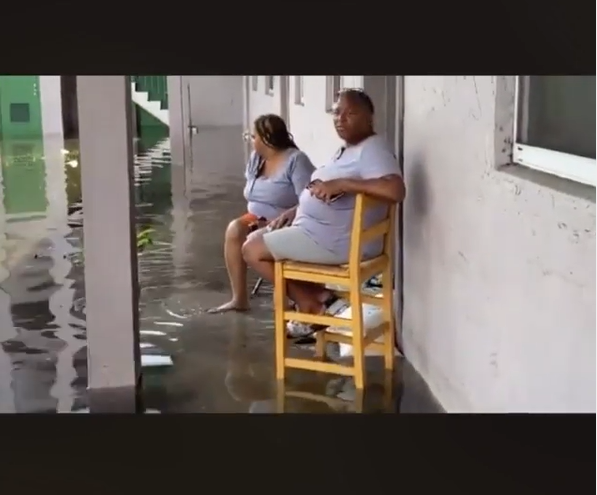 This week’s heavy rains are causing much of South Florida to flood in, but for residents of Glorieta Gardens have it worse than most when it comes to flooding. The complex, also known to many as “The Back Blues,” has flooding so bad that residents damn near have to swim through their parking lot to reach their cars or apartments.

For nearly 30 years residents have complained about the terrible flooding in the apartment complex and slow maintenance repairs, with only a few upgrades happening. However, those things have not fixed the major problem of flooding.

Instagram User @TheRealBushyB captured shocking footage of residents sitting in front of their home in nearly one foot of water, and they even show him how the water has made it into their home. (See video below).

The upsetting video has now garnered more than 10,000 views and more than 100 comments with people in shock, anger and wanting answers on why these residents are living under water. The overwhelming cry from commenters on social media were that the residents deserve better and hopefully they will get the housing they deserve.

This isn’t safe or sanitary and these people should be treated with more respect and Opa-locka Mayor, Matthew Pigatt, feels that way as well. He said he has made it his mission to fix Opa-locka’s flooding problem and he has done his part to help residents in the “Back Blues”.

“It’s an ongoing issue with this property,” said Pigatt. “The problem is it’s a private property issue.”

Glorietta Gardens is privately owned which has made it harder for city officials to enforce immediate change to improve resident’s living conditions. However, to make the property owners act quicker, Pigatt said the city has given them fines and have enforced their code.

Since the property is privately owned much of the onus will be on tenants and concerned citizens to report maintenance issues and their gripes to the HUD Department which is connected to the property.

Pigatt said the city has held multiple meetings to address this issue and has even reached out to HUD and Senator Marco Rubio’s office, who’s district this complex is in. Since HUD is a federal agency, Rubio would be the elected official who could directly report these issues to the department. As of now, no reports show what Rubio has done to address these concerns on behalf of the Opa-locka residents.

“No resident of Opa-locka should live in those conditions,” said Mayor Pigatt. “I am laser focused on making sure this gets addressed.”