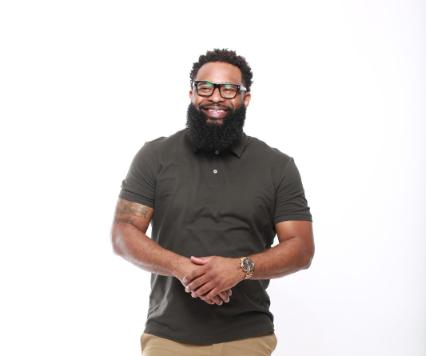 When listening to the Ignant Agenda Podcast, it’s like hearing a mashup of the personalities from the shows Living Single, Insecure and Martin. It’s because the ensemble team of co-hosts give you their honest diverse opinions and because the show is laugh out loud funny.

The creator of this podcast is Nicholas “Waymoflydenu” Waters, and his point of view might make you laugh, it might offend you, but most importantly it will make you think.

“What you can expect from us is consistent content, content that’s relevant to — you know I hate to pinpoint Millennials– but that’s who we speak towards. Everything from relationships. to mental health, to sex, to parenting, to just getting through life and financial stability– all of those great things,” said Waters about the shows content.

Nick began the podcast in 2015 right as the boom for the medium began to take off. For him, the mission of the show was to have open raw unconventional conversations about things Millennials go through in everyday life. However, at that time he needed a nudge from a colleague, to get started in the podcast industry.

“Ignant Agenda started out with an idea to do a show. One of my acquaintances, his name is Vince Vanholla; he and I followed each other on Twitter for a very long time. He would always tell me you have a voice, people listen to you, people follow what you’re doing. And you can always spark up a conversation– you should start a podcast,” he said. “At this moment in time I didn’t know what a podcast was. I was just like whatever man. I would just brush it off a lot of times.”

It took Vince a year to convince Waters to begin the podcast. Before that, Waters was doing an internet radio show in Miami. This was his intro experience into broadcast media and journalism.

When Waters moved to Atlanta in 2015, he decided to create a show where he could display his own ideas. But he wasn’t totally sold on starting a podcast just yet. His colleague, Vince, was still pushing him and would send him articles and information so he can learn more about podcasts. Nick decided to look up other podcasts being produced. The only podcasts he knew of at the time were the Juan Epstein Podcast, a New York based show, and shortly later he followed a podcast that Joe Budden was on as a co-host.

“I used to always think that no one is going to sit and listen to me talk to myself or talk about shit for 45 minutes to an hour,” said Waters about his apprehension.

After the 4th time of Vince telling him, Waters started doing more research and looking into the best equipment for what’s needed to produce a podcast. He then started surveying people to see what a good name for the show would be. However, the word ‘Ignant’ was a word that Waters liked and wanted to incorporate into his new show.

“My definition of ‘Ignant’ is intelligently stupid. You’re smart, you say things that could come off as being stupid, but when you really really think about it, you say dang that makes a lot of sense.” Said Waters.

He went on to share how the show’s name came to him, “So, I’m in the shower one day and I wanted to use ‘ignant’. So, I’m just throwing out shit– ignant this, ignant that, and then something popped in my head and said ‘Agenda!’ It’s an agenda of intelligently smart shit and things people are afraid to talk about,” he said.

The Ignant Agenda Podcasts covers a variety of topics such as relationships, sex, parenting, social lives of Millenials and professional development. Along with Waters, the show is co hosted by Jeffrey Glasscho, who goes by the name ;Lil Dirt’ and happens to be Waters’ cousin. There are also guests appearances from the co-hosts’ significant others and loved ones who are friends of the show. Waters noted that their Producer, Joelle, is an intricate part of the podcast. He said she keeps the show running.

“A lot of people categorize it as a podcast, but we are so much more than that,” said Waters about how close he is with the team. “We are with each other literally every weekend because we all have children, we all work, we all share the same religious beliefs. If we are not recording the podcast then we are taking the kids to Sky Zone sky, the park or birthday parties. It’s a real tight, close knit community.”

However, over the years the show’s cast has changed. But that didn’t stop Nick from pushing forward.

“In all honesty, all the people I started the podcast with are no longer with me. So when I said transition I meant, just learning how to maneuver, managing personalities, learning what works for certain people and what doesn’t work for certain people,” he said.

“Communication is a big aspect of that too because I think a lot of times people don’t really understand what it means to be in a partnership with someone,” Waters said. “Number one, you have to know how to communicate with each other whether you agree or disagree or just have a difference of opinion. So it’s really just maintaining that open level of communication because that is what really drives everybody to be able to be collaborative together.”

Waters, who’s a native of Miami, Florida by way of the city of Miami Lakes, currently lives and records his podcast in Atlanta, Ga. Often times Waters’ funny ‘tell it like is’ voice of the show, airs on the side of controversy. But he says it’s all in good fun and he doesn’t intend to outright offend people, but he’s adamant about not watering down his style or his show.

He credits his upbringing in Miami as part of the reason why he’s raw and honest.

“I come from a family where they definitely speak their minds– right, wrong or indifferent. And we have a lot of discussions centered around religion on my mom’s side. My mom and dad’s side are both very religious,” said Waters, who spent his early years living in the Rolling Oaks neighborhood in Miami Gardens. His family later moved to Miami Lakes.

He said he was raised to go to school, go to church, get a degree, get a job, have a family, 2.5 children and to not have sex before you he was married.

“It was real standard cookie cutter type shit. I just always thought it was so much more to the world than that. Although those things bring a stable lifestyle.”

Around 7th or 8th grade he started thinking what if things were different. From 8th grade to high school he said he was always outspoken. When he got to college it was about networking and meeting new people. But he remained an outspoken person.

“I always wanted to be remembered,” Waters said.

He started his college studies as a Computer Information Systems major, but then changed tracts when he struggled to pass a course called “Discrete Structures.”

“I tell people it’s math with no numbers from a coding stand point,” said Waters. “I said fuck this shit I’m not going to be failing.” So he switched to the School of Business and was still able to graduate in four years from Florida Agricultural and Mechanical University. He later went back to FAMU to get his Master’s Degree in Public Administration.  Currently, Waters works full-time as a Contact Specialist who manages procurement.

These experiences have shaped him to be the man he is today and a strong voice in the podcasting community. With more 178  shows recorded and more than 100 interviews conducted by Waters himself, the show has tons of valuable content that their audience loves. Now in their 5th year, the Ignant Agenda doesn’t plan on stopping. Waters said he tries to tell different opinions that might shock people.

He gave us a funny example of a topic that could easily be discussed on his show. In his example he shared why he thinks Chlamydia isn’t a bad thing.

“This is going to be way left… But me personally I don’t think Chlamydia is that big of a deal. So this is what I mean. If you really think about it, OK yes it’s an STD– everybody knows that. Everybody knows that your body is your temple and all that other bullshit,” he went on to say. “So when you think about it, if they can give you 21 pills and after the 21 pills that shit is gone, then it really wasn’t that serious. It was just like a common cold. But when you say this to people, people will be like ‘Oh my God! I can’t believe you said that. You’re demeaning and putting down the effects that it has on your body.’ But it really doesn’t. It’s the same thing if you were to get the flu or a sprained ankle or something like that… That is my mindset about things because life is so short. You can’t take a lot of stuff seriously,” said Waters jokingly.

The future of the podcast lies in whatever Waters plans to put his mind to next. He has big goals for himself and he doesn’t seem like he’s going to stop until they are accomplished.

“I definitely want to create a media conglomerate where people can come share ideas freely and openly,” he said. “I ultimately see myself doing satellite radio above and beyond, touring and podcasting– doing this full time. It’s very hard trying to manage a full time career, family life and children and a hobby that you’re trying to turn into a full time business.”

However, Waters said the essential part to success in podcasting is to have a strong support system and consistency.

“A good core group of people who are dedicated to the vision is truly truly key,” said Waters. “ I don’t have all the answers. I only have a couple of them and that’s one of them.”

New Episodes of The Ignant Agenda Podcast drops every Friday at 10a.m and you can listen anywhere podcasts are streamed. To check out the show visit www.theignantagenda.com. For more information on Nicholas Waters, check out his Instagram and Twitter pages.