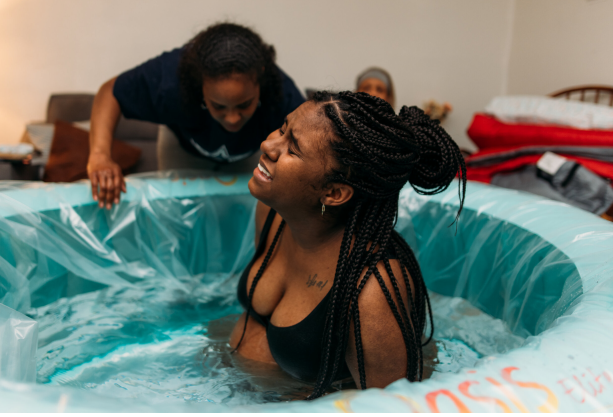 Childbirth, in much of human history, has been a life-threatening process depending on one’s financial status and health insurance. During the 1800s in the United States, slave women worked up until the day they gave birth and began working again immediately after. It has been said that in 15th century Florence, many women began planning their will as soon as they found out they were pregnant. At home births were once very common, unlike today. Historically, midwives birthed most children until the beginning of the 20th century. After the mark of the 20th century, midwives attended only about half of all births in the U.S., and physicians attended the other half.

Today, according to the Centers for Disease Control statistics, over 90% of all births are given in a hospital with help from obstetricians. Over 300,000 babies each year are delivered by midwives. Studies show moms who use midwives have more access to prenatal care, lower rates of cesarean births, and babies with higher birth weights. According to the National Center for Health Statistics, Japan, Sweden, and the Netherlands have much lower infant mortality rates. Midwives deliver almost all babies in these countries.

A midwife is a healthcare professional who can, depending on laws and the state they practice in, perform gynecological examinations, write prescriptions, care for a woman during labor and delivery, perform fetal monitoring, and provide information about contraception. Often times, midwives work closely with doulas. Doulas provide physical, emotional, and informational help to mothers before, during, and after childbirth. A doula typically helps mothers develop a birth plan.

Raeanne Madison, an enrolled citizen of the Bois Forte Band of Chippewa (Ojibwe) Indians who carries strong family ties to the Keweenaw Bay Indian Community, is a doula who uses tribal practices to assist birth moms after birth.

“Birth work is my calling and one that I can’t ignore. I believe my ancestors gave me the sacred responsibility to carry this knowledge forward to new generations of Anishinaabe,” Madison said. “I have worked with families of newborns for over a decade, starting in college when I ran childbirth education classes out of my apartment and started the college’s first new parent support group. Since then, I have personally worked with and taught thousands of community members, professional staff, and elected officials about Native American health in the perinatal period.”

Madison says she charges the average mother $200.00 per day and she has a sliding equity scale for teen and low-income parents of $25.00. She also offers distance health coaching for people who want to work with her, but don’t live near her. Though Madison loves the work she does and thoroughly believes in the importance of her work, she doesn’t believe every person should have a doula at their birth.

“Each birthing person has their own unique needs and those needs may or may not be met by a birth doula. Every birthing person does need their own self-empowerment, education, and supportive community. They need to be held, seen, and cared for in a way that activates their own healing potential within them,” said Madison. “As doulas, we don’t hold that power. Only the birthing person holds that power. My goal as a teacher of doulas and birth workers is to make birth work and postpartum care so normalized that it’s just part of who we are.”

On May 23, 2019 at 3:33 a.m., Sila Massey gave birth to her third child at home— her first home birth. She gave birth with a midwife present and with support from a friend, her mother, her grandmother, and her partner. Massey delivered her first two babies in the hospital, having one cesarean section and one vaginal birth. Massey describes many differences, one being cost. She says the cost for prenatal care, delivery and postpartum care for her at home birth was $3,600 total which was much less than her hospital births.

“Prenatal care absent of insurance is about $3,400, not including the extra out of pocket expenses for any testing, ultrasounds, outpatient visits, problem visits and blood work. The cost of labor, delivery and postpartum care is another $12,000 without insurance,” Massey said.

Massey did not have a doctor present for her at home birth, but she says she say her OBGYN occasionally for health screenings and ultrasounds. She says her doctor told her an at home birth was not recommended because it could be dangerous due to the fact the birth was a vaginal birth after cesarean (VBAC).

“I would absolutely do it again! Being in my home, absent of the invasive procedures and practices found in hospital care was empowering for me. I was able to rest and align myself with my instincts, resulting in the most rewarding birth experience,” Massey said. “I feel it’s irresponsible to recommend any birth option to others because health is varied as are expectations. I believe being open to and being educated about every option is the healthiest approach.”

This article was written by Hy-Lo News contributor, Jessika Ward. Jessika is an award-winning journalist native to and currently living in Sarasota, FL. Ward writes about women, health and fitness, the African American community, children, and the homeless. You can follow her on twitter @jessikalward.

3 comments on “At Home Births Went From Commonality to Rarity; Can be Cost Effective Birthing Option for Soon to be Parents”