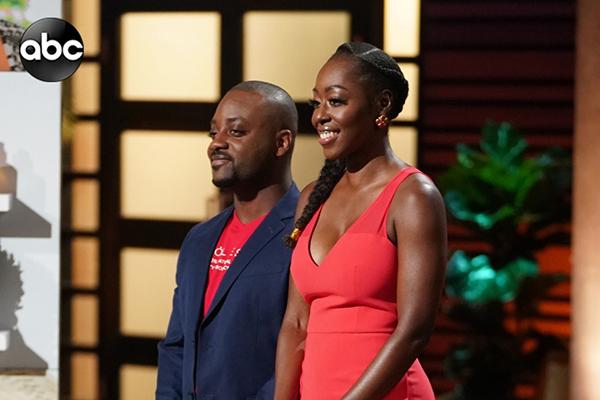 Very few business owners can go toe to toe with the investors on the hit ABC show, Shark Tank, and arise victoriously, but the owners of beauty company Kreyol Essence did just that.

Last Month Kreyòl Essence co-founders, Yve-Car Momperousse and Stéphane Jean-Baptiste, appeared on an episode of Shark Tank in hopes to land a shark investor for their growing company, which began in 2014.

Their pitch got the attention of Kevin O’Leary — also known as Mr. Wonderful on the show– who offered the couple a $400,000 investment in exchange for 37% of their company. With all of the rest of the sharks out of the deal at that point, Yve-Car, started to think fast so she could land the investment they came for. However, she wanted to make sure the deal was best for her company by countering O’Leary, which made for a passionate exchange between the two.

“This has risks,” said O’Leary.

“All businesses have risks,” rebutted Yve-Car.

O’Leary went on to say, “I’m impressed by you, but now we’re having a tough love discussion. It’s about money. I want to make money.”

Mr. Wonderful said absolutely not, but the Haitian Beauty brand owners were not leaving without a deal.

Kreyol Essence co-founder, Stéphane, began to get emotional as he explained that this company was more than just making money to line their pockets.

“It’s my culture. It’s my identity. It’s everything my parents sacrificed to get us here,” he said while tears of passion rolled down his cheeks.

Yve-Car, who had started to slightly tear up as well chimed in. “It’s not just about the great product it’s about the mission of helping to create a blueprint for poverty alleviation which is a huge problem around the world.”

But O’Leary wanted to know what they were going to decide. “You have to make a decision. I’ll still have the $400,000 when you walk out that door and there will be another person in front of me.”

Staying quick, Yve-Car said, “Yeah and I’ll still have that account where I’m going to make $2 million this year and go on to make 5, 10 and make sure we get to $100 million dollars because that’s what businesses of our rank and size have done and I want you to be a part of that– but that is too high.”

Despite the emotion and banter back and forth dialogue, O’Leary pressed the entrepreneurs to make a decision. Thinking fast as she felt the investment slipping away, Yve-Car eventually offered Mr. Wonderful a chance to do a royalty deal, which would mean the investor will be guaranteed to make a set amount of money off of each unit or item they sold. O’Leary liked the deal and accepted it with minor adjustment to Yve-Car’s initial royalty offer. They walked out winners.

“We were not expecting Mr.Wonderful…. to be a partner in a Haitian beauty brand not what you expect everyday, but Kevin O’Leary surprises you,” said the excited and grateful Kreyol Essence co-founders in their post show interview.

Yve-Car handed Mr. Wonderful’s tough love right back to him. She even impressed the other sharks and caused Shark Tank investor Barbara Corcoran to comment.

“I did not see that coming,” said Corcoran, “Wow she has a lot of fire in that belly.”

More success is in store for the Black-owned beauty brand. Kreyol Essence was chosen as part of Hollywood superstar Jada Pinkett-Smith’s Holiday Gift Guide list and they are also set to launch this year in all 1200 Ulta Beauty Supply Stores in the United States. Kreyol Essence was also trending on social media after their passionate appearance on Shark Tank.

Kreyol Essence brings natural hair, skin, and body products from Haiti to the world. Our eco-friendly formulations are made from pure and natural ingredients with a special focus on dry hair and skin. As a social business, we are maniacal about creating sustainable jobs, protecting and conserving the island’s environment and empowering women. We promise that every purchase you make will have a positive and global impact.

Check out a clip from Kreyol Essences’ appearance on the ABC’s Shark Tank.