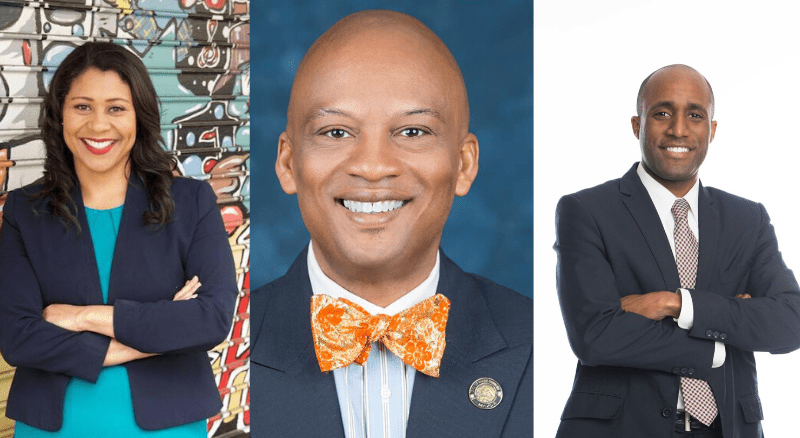 History is being made with Super Bowl LIV this year, and not in the way you might expect. For the first time in the NFL’s 100-year history, the mayors for the two teams playing in the Super Bowl and the mayor of the host city are Black. Mayor Oliver Gilbert represents Miami Gardens, Mayor Quinton Lucas represents Kansas City and Mayor London Breed represents San Francisco.

There are 19,429 municipal governments in the United States, and of the top 100 cities in the U.S. – only 39 elected mayors are Black, according BlackDemographics.com. Having three African-American mayors representing their cities on the nation’s largest platform is no small fete.

“It’s significant not just because we are three Black mayors, but also because of the diversity of the cities that we represent,” said Mayor Gilbert. “Miami Gardens, Kansas City and San Francisco are very different cities and require distinct types of engagement and leadership. Our collective representation illustrates the vastness and diversity of Black leadership in America.”

Kansas City Mayor Quinton Lucas echoed a similar sentiment: “I think it’s an outstanding representation of where America is now because, if you look at us, we all represent cities that have very diverse populations. I was able to win an election with probably about a 75% white electorate. I know Mayor Breed has done a great job over in San Francisco and I certainly know your mayor down in Miami Gardens has been doing outstanding. I think it kinda reflects where America is right now and where the American city is right now and the strength of Black leaders across the country.”

Mayor Breed, who is the only woman among the three mayors, shared her views on representation as well.

“Black children of all ages can look at players from both teams and see athletes that look like them. For young African Americans to see that every mayor involved in the Super Bowl is Black will show the next generation that they can be whatever they want to be. I hope that we can inspire the young people around the country to follow their dreams and consider a future career in public service,” said Breed.

Mayors Lucas and Breed represent some of the largest cities in the United States – Breed in San Francisco comes in at 15 and Lucas in Kansas City comes in at 37 on the list. Gilbert represents the one of largest Black-run cities in the United States. Also, Breed was elected mayor in a city where African-Americans are just 5 percent of the population, according to an article by NPR. Lucas also won in a city with a large white population.

The mayors hope that their representation shows the country the importance of Black and diverse leadership.

“I hope one thing that it does is it gets people to cast a longer eye on our cities and on us as leaders and see the creative things that we’re doing. I mean it’s too bad that in the presidential election right now the story kinda is how Black candidates could not break through and how minority candidates couldn’t break through,” said Lucas. “I would like people to at least see we are dynamic; we are brilliant; and we are coming up with some things that frankly are transforming our cities, transforming this country.”

Mayor Breed hopes black children will see their story and are inspired to lead theit communities.

“I hope that the young people—especially young African Americans—who see Mayor Lucas, Mayor Gilbert, and me will see that they too can be successful and they can serve their communities. Who knows? Maybe we’ll inspire a young person to become a future Mayor of San Francisco, Kansas City, or Miami Gardens,” said Breed. “One of the reasons I decided to dedicate my life to public service is because I felt that my community did not have enough representation in government. I didn’t see people who looked like me representing my district in City Hall and I wanted to change that. Diversity is essential— whether in government or in sports—and we’re all better off when we have voices at the table that can speak about different experiences and challenges and share their ideas for making the world a better place.”

Historically, the two mayors of the teams competing in the Super Bowl place a bet. Although Lucas and Breed have yet to place their bets, Lucas is sure Kansas City’s hometown favorites will be a part of his wager.

“We are planning a bet. I don’t know what it is yet but in Kansas City we have some great food some great barbecue and I’m certain that will be part of it,” said Lucas.

In an article published in the Kansas City Star , Mayor Lucas later announced that his wager includes Gates Bar-B-Q, Boulevard Beer, knickknacks from Made in Kansas City and T-shirts from Charlie Hustle. And according to NBC Bay Area, Mayor Breed is placing her bet the city’s famous Thanh Long garlic noodles and crab and rum cake from Dianda’s Bakery and beer from Anchor Brewing, all San Francisco businesses.

All bets aside, the mayors are looking forward to the big game for more reasons than just a great football game.

“I think it’s brought some excitement to Kansas City, which is a very important step for us. I think the other thing it has done though is it has made everyone stand a little bit taller. If you are from a Midwestern town like this people don’t talk about us all the time,” said Lucas.

For Gilbert, his hometown will be on the world’s main stage and he couldn’t be more proud, especially once being a young kid who parked cars for games at the very stadium Super Bowl LIV will be played.

“I love Miami Gardens; it’s my hometown; and I’m over excited to have the eyes of the world on Miami Gardens for the Super Bowl,” said Gilbert. “Young people can look at the three of us and understand what’s possible through a life of service to others.”

This article was originally published in the Miami Times on January 29th. You can read the story here.

The NFL Organization could not be immediately reached for comment for this story.