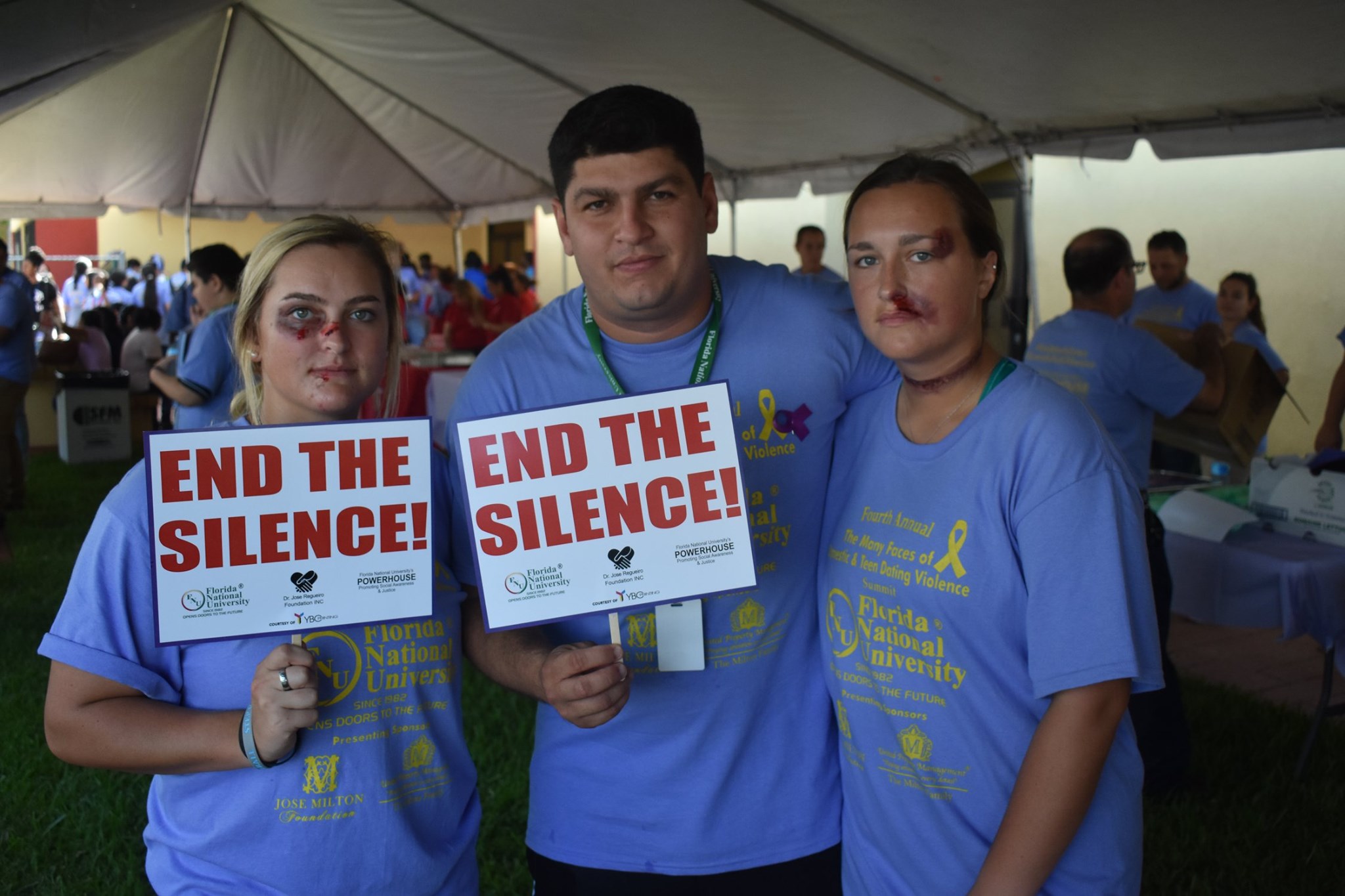 More than 500 students from various schools in Miami-Dade County came to participate in the Fourth annual “The Many Faces of Domestic and Teen Dating Violence” summit. It all took place at the Florida National University Hialeah campus and was open to the public.

During the event, students saw skits about the dangers of domestic and teen violence, listened to survivors tell their stories as well as were encouraged by guest speakers to take the right steps to prevent teen domestic violence and what to do if they find themselves in that unfortunate situation.

One of the events lead supporters, Ana VeigaMilton, was excited to see how engaged the students were with the message being brought to them through the event that she gladly supports. She is the President of the Jose Milton Foundation and Social Responsibility Officer at United Property Management.

“When the kids see the fun and see support from all the adults, and their teachers, and the first responders, the police that are out here and the firefighters and the military; when they see all of that come together they realize they have power and that we are standing behind them,” said VeigaMilton. “It really makes me feel  good that the students took this message had fun with it and power from it. I’m hoping it brings out a dialogue that they share in their homes and they take this to their parents and siblings and friends.I hope they know they have the power to stand up and that they don’t have to take this.”

According the FNU event organizers, as youth begin dating, it is important that they are equipped with the necessary tools to help them engage in healthy relationships. The Domestic/Teen Dating Violence Summit showed teens and the public at large, what behaviors constitute respectful relationships, as well as how to recognize the warning signs and patterns of dating violence.

According to the National Coalition Against Domestic Violence, one in three women and one in four men have experienced some form of physical violence by an intimate partner. One in  seven women and one in 18 men have been stalked by an intimate partner during their lifetime to the point in which they felt very fearful or believed that they or someone close to them would be harmed or killed.

In recent years, there has been a noted trend in couples getting married later in their lives. Consequently, dating violence continues to escalate. Sadly, teenagers are not immune. The NCADV reports that approximately 1.5 million youth in our schools are victims of dating violence and maltreatment each year.

Domestic violence is a real crime that happens far more frequently than it should. One criminal act is one too many and it is one that Florida National University, The FNU Powerhouse accompanied with Dr. Jose Regueiro Foundation and numerous dedicated sponsors aim to combat and prevent it.

“We’re trying to bring awareness to everyone in the South Florida area about how these kinds of offenders control their victims,” said Dr. Maria Regueiro, President and CEO of Florida National University. “We want to empower people with information that will help save lives. Students will be able to see the signs and end unhealthy relationships, or if they are already involved, they will know what they can do to get the proper assistance to escape. In essence, the goal is to bring awareness through education to prevent someone from becoming a victim of these atrocious and sometimes deadly crimes.”

The summit was organized in part by FNU’s Powerhouse group. The mission of Powerhouse is to eradicate such societal horrors in the South Florida community. Therefore, by promoting summits like The Many Faces of Domestic and Teen Dating Violence, the over 100 Powerhouse members, which are all Movers & Shakers throughout Miami-Dade County and beyond, are certain that children, teens, parents, educators, and the community will be empowered to combat this trouble, and avoid the lethal path of domestic violence.

“If we’re all in this together we’ll create a shield and this force field around South Florida and prevent all this evil from coming into the community,” said VeigaMilton.

For more information and resources about domestic violence, call the National Domestic Violence Hotline at 1-800-799-7233 or visit their website here.

Check out a few pics from the event. Photo Credit: Florida National University.