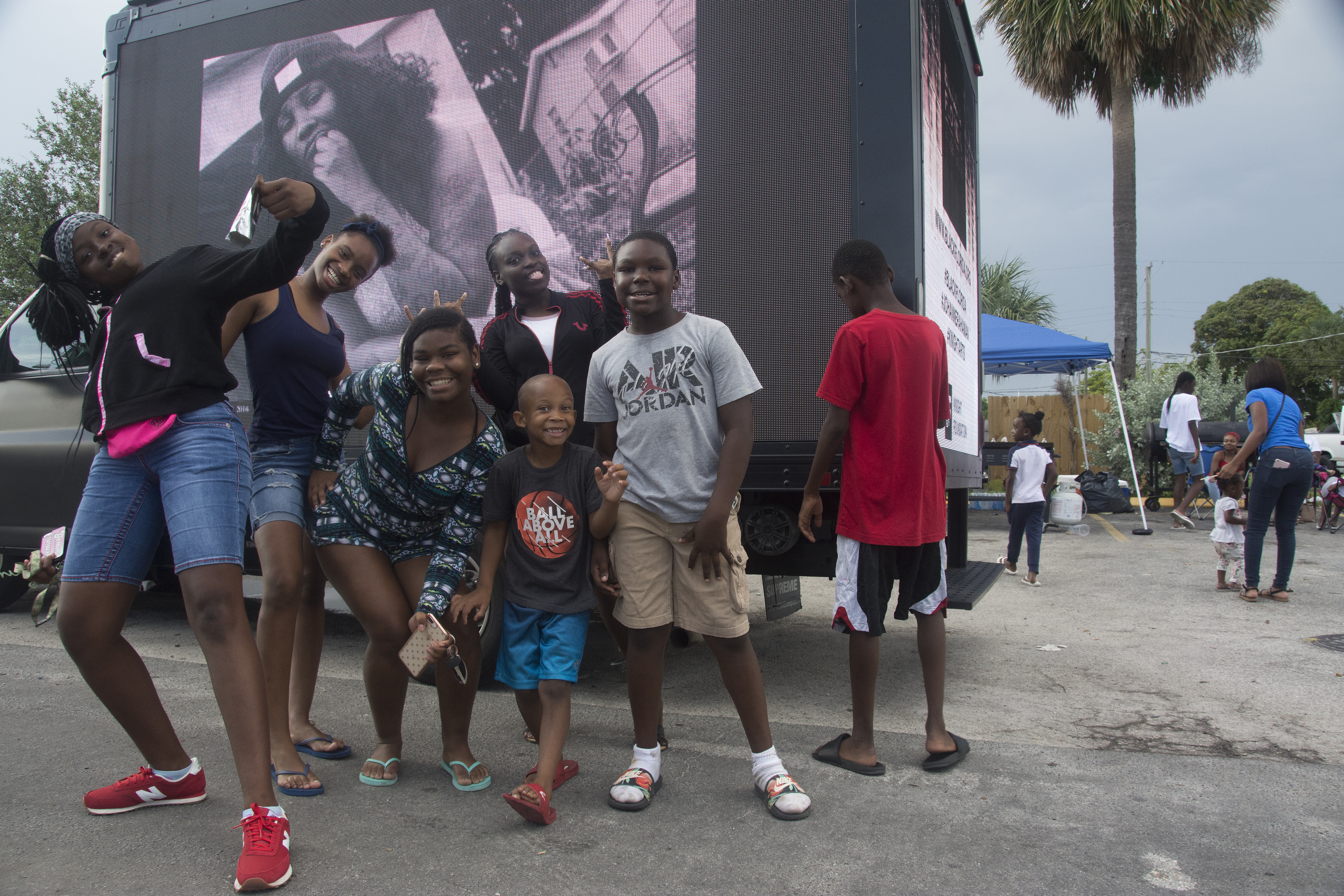 The mobile show which is part of BlackFlorida, a photographic archive showcasing the nuances of rural towns and inner cities throughout Florida. The show also incorporated a musical score by DJ Boa Kai, a Liberian-born, Broward-based musicologist, which reflected the sounds and feelings Rahaman encountered while documenting the homes, in the streets, churches and businesses of the community.

Inspired by the relationships and familiarity to the people and the areas, Rahaman chooses to bring the exhibit to the streets instead of showing at an art gallery which can be considered to be “white spaces” and too “exclusive” for many.  This show is one of several more similar shows to follow in different neighborhoods.

Many of the residents which were featured in the show were able to see their own images on the screens as the truck traveled through NW 7th Avenue and NW 79th Street, criss-crossing the streets and avenues to 54th Street, then across 54 Street to Little Haiti.

The photographer, Rahaman, resides in Miami, FL and was awakened to photography in 2002. The marginalized black communities in Florida mirrored the Laventille Hills of Trinidad where she grew up, and she was compelled to offer a more nuanced view than what is often seen in mainstream media. Rahaman’s work has been featured in publications across the country including National Geographic, Vogue Magazine, Huffington Post, New Yorker Magazine, Jezebel and Miami New Times.

BlackFlorida is also one of 43 projects awarded The John S. and James L. Knight Foundation, Knight Arts Challenge in 2017.

To see more pictures from the event and Rahaman’s art installation, check out her Instagram page below.

It’s a wrap… Liberty City MLK Day Parade and the Little Haiti Rara Parade, returned to the communities via a moving gallery – Swipe to see images from today. Video at the end at a corner in Pork-n-Beans where we ended the show. More photos to come. . . Big thanks to the folks who joined me on the road to document the show @pocket_sized_vicky @yrprmiami @weloveyvonne @cathy_contemporary @colette_mello and special thanks to DJ Boa Kai whose playlists had everyone jumping. . Liberty City-Little Haiti, FL October 13, 2018. #blackflorida #johannerahaman #blackhistory #knightarts #libertycity #littlehaiti #waterrights #fromthesouthtothesouthernmost