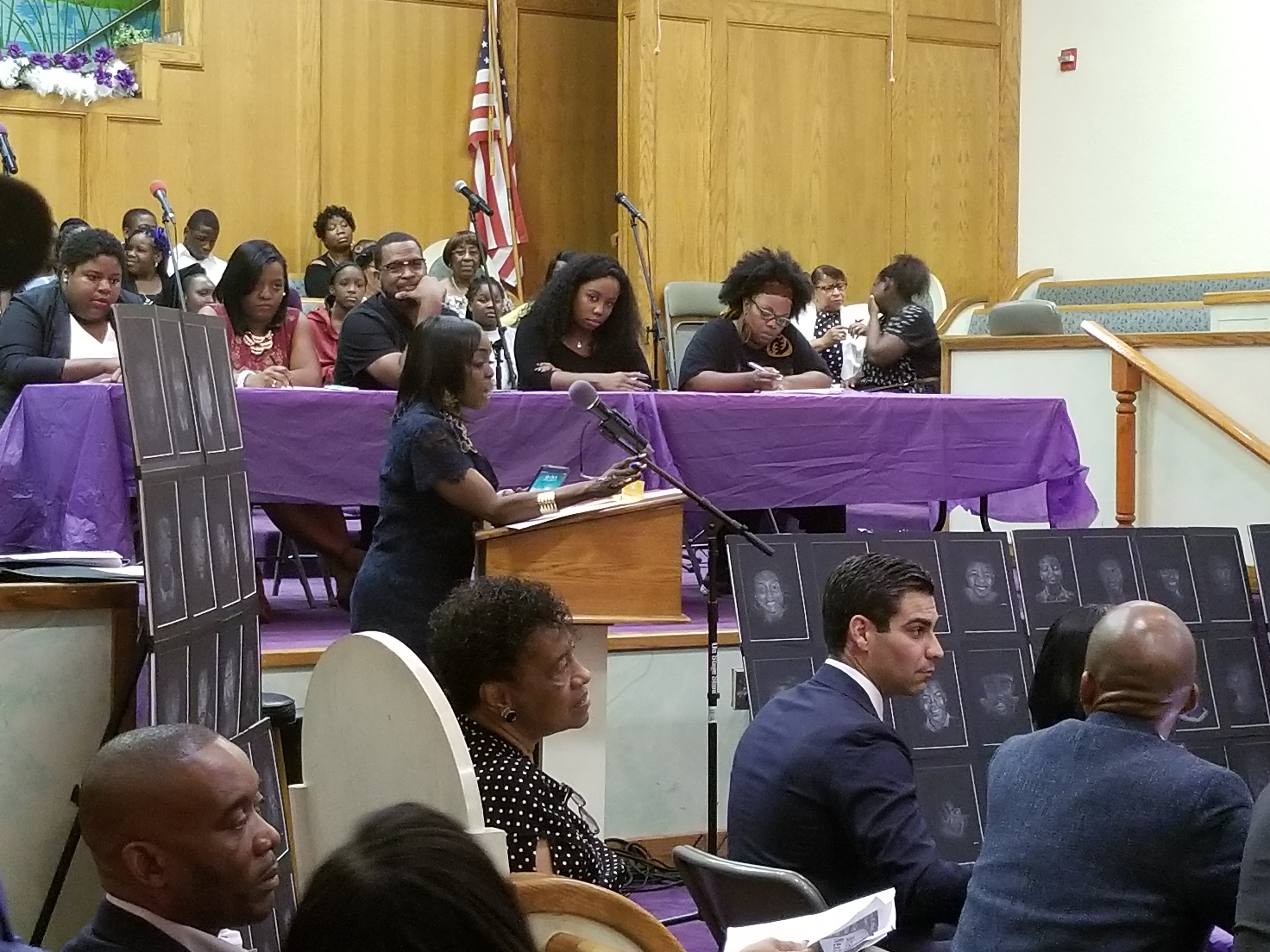 Residents and advocates from Black Communities in Miami-Dade county demanded solutions from elected and government officials on how to curb gun violence at a town hall meeting in Liberty City. Some officials gladly participated while others made excuses, but either way host and organizer for the community meeting, Tangela Sears, was not going to let anyone off the hook easily.

“We want to enforce the law for violent offenders, but we also want to help our children as well,” said Sears.

The February 26th meeting, which was a follow up to a January meeting Sears spearheaded to create a 5 point plan to solve gun violence in inner city communities, featured a five person panel of advocates that included Luther “Uncle Luke” Campbell, Valencia Gunder, Leah Wilcox Sears, Tawana Akins and Chire Regans. Sears, who is a mother that lost her only son to gun violence in 2015, expressed her sympathy and solidarity with the families of the tragic Parkland school shooting. However, she also reminded the government officials in attendance that banning assault rifles alone would not combat crime in the inner cities.

“It will stop killing in public places, but not in our communities,” said Sears.

Elected officials from various municipalities, police from different agencies and government officials from across the county crammed into the Mt. Calvary Baptist Church sanctuary that evening to give updates on information requested by the community group. Sears, who founded Parents of Murdered Children, gave everyone at least 30 days to give the community answers to questions they desperately wanted to know. Questions which included stats on convictions of criminals who commit gun violence crimes and how many programs are receiving county funding to keep kids active and productive.

The meeting kicked off with the US Attorney’s Office who’s rep did not have answers for questions that were emailed to him, however he promised to get them for the next meeting. Sears warned that he had 30 days to do so.

When the Miami Dade police director came to the US attorney’s office defense, Sears shut down the overprotecting and demanded that each agency wait their turn to speak so that time didn’t run over.

Panelist and Liberty City resident, Leah Wilcox, showed proof that she continued to contact the State Attorney’s office for information but staff was not helpful. Luther Campbell also asked the State Attorney’s about the total number of convictions they had. Those requests went unanswered as well.

“This is a horse and pony show that they are doing with us,” said Campbell.

The State Attorney’s office did agree to meet the group outside of the meeting to discuss how they could go about getting the stats that were requested.

From there discussion shifted to the school board’s role in combating gun violence. Superintendent Alberto Carvalho and school board members Dr. Steve Gallon and Dr. Dorothy Bengross-Mindingall attended the meeting. Carvalho updated the community on initiatives the school board has implemented to keep students safe and productive which included programs the Together for Children program.

Later in the meeting Miami Gardens Mayor Oliver Gilbert spoke on how he would support legislation on the state and national level that would help to stop gun violence. He mentioned that tougher penalties needed to be implemented for criminals so that there is a message sent out in the community that you go to jail when you commit violent crimes. He and Sears also mentioned that many of the guns on the streets in Black Communities are purchased by “straw buyers”, which are people who buy guns, report them stolen and sell them to criminals.

“We need find away to make straw buyers go to prison,” he said. “They are going to gun shows they are buying guns legally and then reporting them stolen. There has to be fewer guns on the street.”

“We need to be real honest as a community. Sometimes as a community we’ll say why are yall pressing charges on these young black boys,” said Gilbert in reference to tougher prosecution on repeat offenders. “They need to go to prison before they commit the murder so they understand there are consequences to their actions.”

Sears and Campbell also demanded that Miami-Dade county do more financially to help residents trying to curb gun violence and murder in their communities. They also asked for the county to work with Rep. Kionne McGhee who requested that county declare a “county of emergency” similar to a “State of emergency” so that would release funds that will help combat gun violence. Miami-Dade Deputy Mayor Maurice Kemp said that the Mayor had not responded yet and that he would, but told the crowd that the county would not declare a “county of emergency” because it would not bring dollars to the county to assist with gun violence and crime.

“This is not the answer,” said Kemp. “This is a societal problem.”

The 2 and half hour meeting ended with the police agencies giving reports on arrests for violent crimes in their districts.

When the audience was allowed to asked questions, a mother who lost her son to gun violence was one the last people to speak during the meeting. Her plea to the city of Miami police echoed concerns many black residents have when dealing with the police. She recalled being recently harassed by a city of Miami police officer. She then told the crowd that a 12- year- old was murdered in Overtown recently.

“The police are too busy policing art galleries in Wynwood, and not in Overtown where the residents need them,” she said.