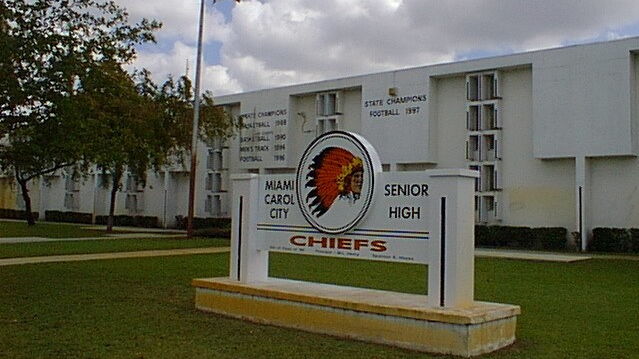 (Note: Story was drafted in the Spring of 2016, but never posted. Idk why, probably writers block. However, I felt it needed to be published because the words still hold true.)

A little over a week ago, myself and anyone who ever attended to Miami Carol City Senior High School and had the honor to literally walk the schools old hallways through Chief Haldiscovered a new Facebook group titled, Chief Hall. A group private invite only group created to bring toget her all the Chiefs of past and present and to discuss our experiences at the school.

And like the real Chief Hall where students gathered to socialize, Chief Hall the Facebook group grew quickly, serving as digital meeting place for all who “bleed” orange and black.

I don’t know how you found the group but, I learned of it after Stro Corleone or Chris Strothers as I know him from high school (SN: There’s a pretty cool profile on him on this blog site) mistakenly posted something he meant for the group on his Facebook page. He spoke poinghoul (I’ll post it below) about the his experience as a football for the famed football program and he spoke about the lack mentors. I saw that and was like I have to join whatever group is sparking this kind of real and honest conversation.

You see, Chief Hall is unique in the sense that it’s monitored by alumni from the 90’s who make sure the halls and kept fun and informative. I suspect J-Boy, Moses Washington, and Raheim Rainey and Freezy Prince are a few of the administrators, and they and other admins do a great job, in my opinion, of keeping things in order.

Warning if you’re a Chief and you’re not already a member if you join please know that you’ll legit lose days of productivity (lol) because the group always has some new funny tea filled post that will definitely take your attention. I hate to admit it, but I’ve been hooked and I check in their before o do my regular Facebook timeline. Once in the group, everything outside it om Facebook seems so lame.

The Group at it’s core has re-energized Carol City alumni. People have garnered more pride in the school, are supportting each other’s businesses, organizations and causes, have remembered the fallen Chiefs and it has sparked interest in more people wanting to join the school’s. Events to socialize have popped up including a community picnic on April 17, a yacht party and another alumni picnic this summer.

I know some can do without the name meme jokes (or ranking as it was called when I was in high school 10 years ago), but makes the group unique. There are post praises Chiefs for their great work in and beyond high school and then there’s the laugh out loud funny as hell memes. There’s even Chief Court where people, including myself lol, have to prove their pride, support and allegiance. I swear it’s like going through the OJ trial, and you have to prove your case, and if lose you hear the dreaded words, “press the damn button.” Chile you can tell these people were in Carol City’s law magnet program, all that legal jargon. But rather you your case or not, the whole shit is funny.

To me it’s all like listening to a rank session on the patio or in the hall. And you can’t lie, the Hall brought back a lot of fond memories. I also love how the gap of the older classes and younger classes are closed. People I only heard about through legendary tales from former Chiefs who coached or taught at the high school, are now discussing things with us in the digital hallway.

That’s Chief Pride at it’s best. Let’s continue to create synergy where the school can always remain one of the best in the state. For me it will always be “Hail to Thee Beloved Carol City Guardian Of Our Truth. Chiiiiiieeeffff Prideeeedah!”