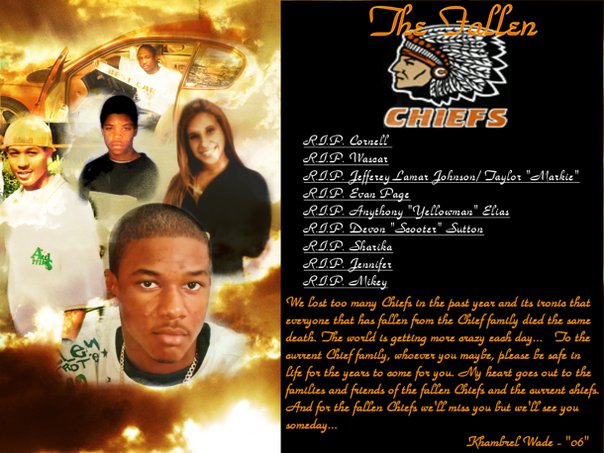 Reasons why Class of ’06 Should Attend their 10 Year Reunion

Lives that could have been

Sitting quietly in a corner office overlooking the Downtown Miami skyline, sits a Black 28-year-old male attorney thinking about how to approach his closing arguments of a huge case he’s trying. This guy is smart, good looking, cares about his family, is recently married with his first child on the way — a son who will bear his name as well. He’s from the”Baha” neighborhood in Miami Gardens and was raised by a loving single dad who pushed him to succeed. He loves his siblings dearly and is down for his boys– they’re just as tight as they were in high school, now with deeper bonds. This young man plans to make a real difference in his community and that would be great and much needed, but this guy doesn’t exist. This young man I imagined is Jeffrey Johnson Jr.

Just like me, I know all my classmates imagine where in life Jeff a.k.a Markie would be. We wonder how he’d look, what profession he’d been in, where he’d be living. We wonder if he would have accomplished his goals of becoming an attorney, would he still be the sweet smart guy who would give you his last, we wonder would his laugh still be as infectious. Unfortunately, we can only wonder. Ten years ago, we all got the heart shattering news. Jeffrey Lamar Johnson had been murdered while at a party in Liberty City. He was just 17-years-old, a few months away from his 18th birthday and a week away from graduating high school with honors. He never took that walk. Instead his dad, mother, sister, brothers and best friends had to figure out funeral arrangements and not college rooming arrangements. And the school, Miami Carol City Senior High, mourned the lost of their own– a bright star who’s light dimmed to damn soon.

Let me give y’all some background

In 2006, Miami Gardens was a newly formed city, just three years old. To us who grew up there, who lived there, we were still transitioning from the area being called Carol City. To many of us, that’s still it’s name. Although, the area has some crime issues, for the most part Miami Gardens or Carol City was a cool calm place to live. Many people had single-family homes, took care of their families and just wanted what everyone else wants– happiness and peace. And we had that. But somewhere along the line  around late 2005 things started changing in the neighborhood, people were getting robbed and killed more often. Locals blame it on the Scotts (Scott Projects in Liberty City) closing down and those residents moving into the area, others blame it on the lack of fathers in the households, some said people needed to refocus their life on God, and some blamed it on poverty and the drug game. I honestly, couldn’t tell you what the fuck is the actually cause. I just know stuff changed back then, but even still the area was still a cool place to live. And Jeff was one of the cool ass teenagers that help make up our cool ass population.

Y’all got to understand, that in our area you had an interesting dichotomy of people. You could encounter middle class professional established black folk, then you could encounter people who lived life on the edge and dabbled in criminal activity, and everyone in between. So you could meet a kid who understood the street life, maybe had family affiliated with it, but who had parent(s) that pushed them to be better. You could have a kid like Jeff, who was really smart, loved reading, constant Principal honor roll student (meaning he made straight A’s) in the Law Magnet program at the high school, but in the same light could tell you about a rougher life, loved trap music, and drove one of the nicest tricked out cars(since 9th grade) at the high school that even made the seniors respect him. He was a well balanced young man. At 17-years-old he was the type of conscious person most people didn’t become until they went to college– having an deeper understanding of the world around him and beyond. He could get along with any race, gender or religious group. He understood his place in God’s creation. He lived this way as a teenager, and it wasn’t until after he passed, that we realized how many light years head of us he was.

Unfortunately, Jeff wasn’t the first or the last fatality the school encountered. We cried about Brenton’s death in 2004. Evan, Sherika and Cornell left us way too soon, and the lost after high school of Anthony “Yellow Man” Elias and Brian DuPree hit our already hurting and grieving hearts. By that time our class was numb to the pain, depressed even, melancholy — I know I was.

However, all those mentioned who passed were unique in the fact that they weren’t bad kids,  they didn’t partake in violent crimes. They were regular kids from a middle class and working class area that wanted to succeed in life. And hell, Jeff was a true honor student. A jock. A nerd. A popular kid.  A nice guy. To us, he was the last person we thought would die that way. His death, his senseless murder made us realize that life was short, that maybe a 100 years of life wasn’t promised to us. His death made us realize our own mortality.

And unfortunately, Miami Carol City high school wasn’t the only Dade County school to have tragic losses of students in 2006. A few of the  urban core high schools (Miami Northwestern, Miami Central, Miami Norland, North Miami, Booker T. Washington, Miami Jackson, Miami Southridge) lost students to senseless violence– and our hearts went out to them too.

We didn’t let that hold us back

They called us the ‘cursed’ class of 2006 because of the deaths, many of which were by way of a bullet. But we didn’t accept that shit. I never understood how the media could call an entire group of people– teenagers– cursed because of unfortunate incidents. They didn’t realize the potential power of their words and how that could have struck fear and apathy in our hearts. But we rejected that mantra. We became great dads, mothers, caregivers, doctors, lawyers, teachers, correction officers, military service men and women, police, writers, social workers, pharmacists, accountants, etc and just all around fucking dope ass people and productive citizens. Many of us rejected that negative stuff that was said about us and used our lives to honor our fallen Chiefs — our classmates. Many said they wouldn’t partake in gun violence. Many chose better ways to solve problems — ways that allowed us to make it home at night. We chose to live life, and happily and on our own terms.

So to the students of Miami Carol City Senior High school’s  class of 2006, party hard this year at our ten year reunion, celebrate your lives, catch up with old classmates and enjoy each other. Trust me, I’ve debated on attending my ten year reunion as well, but then a few days ago I was driving north on 37th ave and crossed Jeffrey Lamar Johnson Drive– the street namesd in Jeff’s honored. I remembered how much he loved to have a good time and I thought about how he wouldn’t miss a chance to turn-up with his classmates again. Since my classmates can’t be there to party and celebrate in person, I choose to do it for them. To me, it’s only right.

Feel free to email me more pictures of fallen Chiefs from the mighty Class of 2006 so they can be added to the photo galleries! Send them to hylonews@gmail.com or message me on Facebook @ Hy-Lo News.