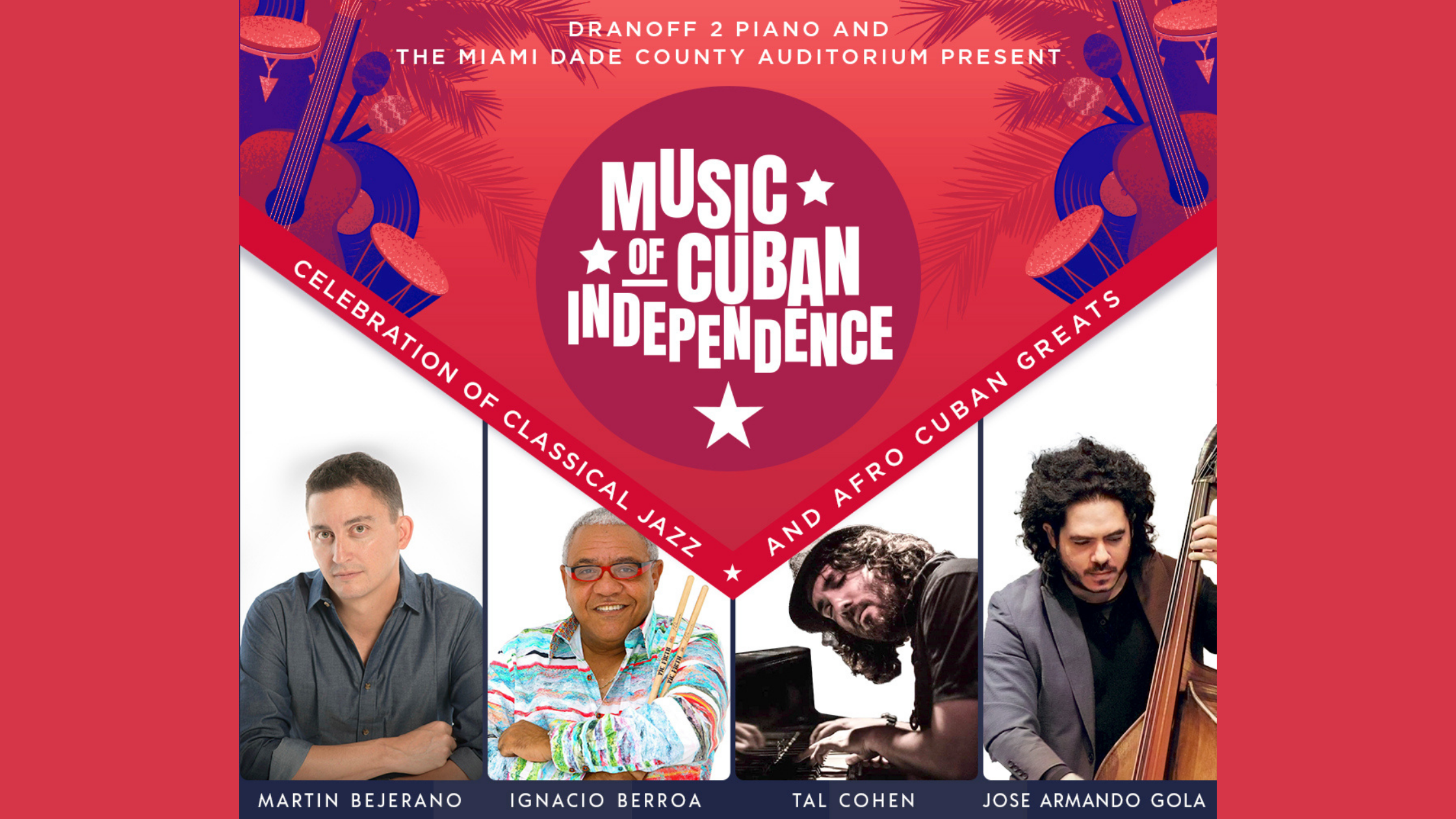 Dranoff 2 Piano Foundation proudly presents the concert “Music of Cuban Independence” on May 20, Cuban Independence Day, at the Miami-Dade County Auditorium. World-renowned musicians will come together to explore Cuba’s spectacular musical heritage, celebrating the contributions of famous Cuban artists and composers from the time of Cuba’s independence from Spain to the present.

This gorgeous performance will take the audience on a journey of Cuban music and its inspirations from the post-colonial era to the 21st century, recognizing the important artistic contributions and exciting entertainment of our closest neighbor. ‘“Music of Cuban Independence” will remind the audience that, although 90 miles can seem so far away, music has the power to bridge physical distance. These artists will transport us to the roots of our own hometown art and culture, says Carlene Sawyer, CEO of Dranoff 2 Piano Foundation. “Dranoff’s Cuban Independence concerts are a fantastic opportunity to showcase and to uphold Miami’s large and diverse Latin population, the artistic richness, and evolution of the waves of music that have come across the 90 miles of water from Cuba spanning 100 years of popular favorites from Classical to Jazz to Afro Cuban music and dance rhythms—adds Sawyer.”

How to Buy Tickets

For 36 years, the Dranoff International 2 Piano Foundation has been the world’s leading champion of exclusively two piano repertoire and artistry. It is the only international foundation, accredited by the World Federation of International Music Competitions, to discover, promote, and award honors to top professional duo piano artists through its competition, commissions, and presentations of duo piano concerts. The Dranoff promotes awareness in a new generation of students of the transformational power of music and the arts through its multi-disciplinary, educational, and inspirational concert program, PIANO SLAM. Learn more: www.Dranoff2Piano.org and @dranoff2piano.

Tal Cohen is a Grammy award winning pianist, hailing from Israel, who has received much acclaim during his young career. He was the winner of the Barry Harris National Piano Competition and was the recipient of the prestigious Freedman Fellowship award at the Sydney Opera House. Tal has played around the Globe with Terence Blanchard, Greg Osby, Ignacio Berroa and Joe Lovano, and he has performed at numerous festivals such as Jazzbez Jazz Festival (Ukraine), Detroit Jazz Festival, Melbourne Jazz Festival (Australia), Sopot Jazz Festival (Poland), and others. Cohen has become one of the most in demand pianists with his unique blend of Jewish melodies, traditional jazz Harmony, and an impeccable rhythmic pallet forging a path to be remembered.

Ignacio Berroa has been recognized as one of the greatest drummers of our time. A leading innovator in the blending of Afro-Cuban and American jazz styles, his artful drumming has supported a wide spectrum of the very top names in jazz, including Dizzy Gillespie, McCoy Tyner, Chick Corea, Wynton Marsalis, Freddie Hubbard, Charlie Haden, and Gonzalo Rubalcaba. Ignacio has led his own Grammy- nominated group for over 20 years and has performed at nearly all the major jazz festivals, concert halls, and clubs internationally. He has consistently been on the cutting edge of the jazz and Latin jazz scene for nearly 40 years, and has been an integral influence on its shape and development. His incredible artistry on the drums has garnered critical praise across the world, with the L. A. Times writing, “Ignacio Berroa may be the strongest and most versatile drummer Gillespie has hired in years.” Modern Drummer wrote, “Like a Cuban Roy Haynes, Ignacio’s drumming sizzles, sparks, and pops, easily flowing from Rumba to Swing.” He was included on the 2011 Blue Note Records Compilation CD, “Jazz Drumming Legends,” which features some of the most renowned drummers in jazz history. Jazz icon Dizzy Gillespie defined Ignacio as, “… the only Latin drummer in the world, in the history of American music, that intimately knows both worlds: his native Afro–Cuban music as well as Jazz.”

0 comments on “Dranoff 2 Piano Presents “Music of Cuban Independence”… A Celebration of Classical Jazz and Afro-Cuban Greats,May 20, at the Miami-Dade County Auditorium ”