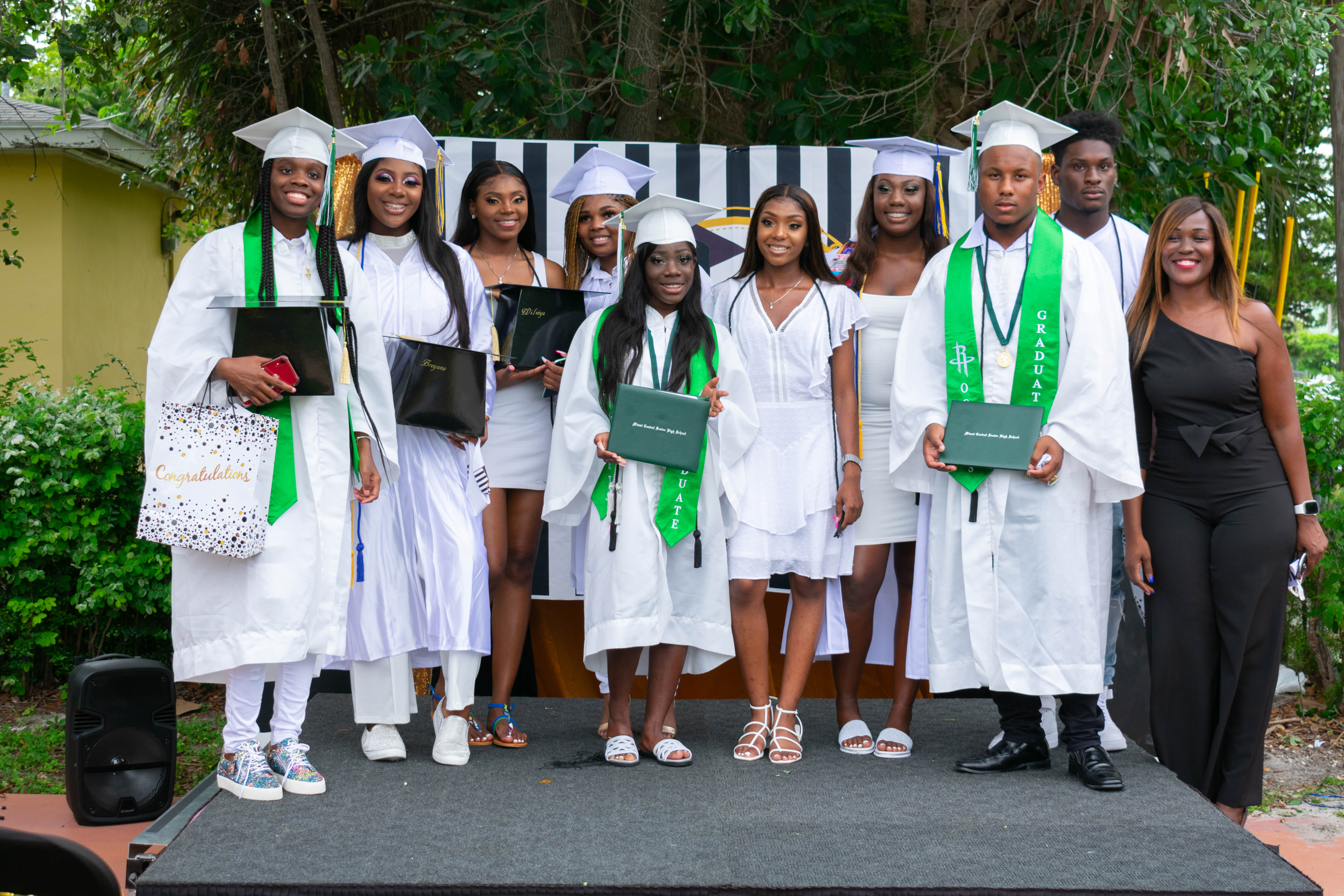 When Shaneka Woody pulled up to Miami Northwestern Senior High School last month so her daughter Quenay Woody could pick up her cap and gown pictures and Quenay burst into tears, Woody knew she had to do something to celebrate her 2020 senior.

Though COVID-19 had robbed the Class of 2020 of many of their major senior year milestones, Woody was determined Quenay’s hard work wouldn’t go without pomp and circumstance on her watch.

She decided Quenay would walk across a stage, even if she had to build it herself. Before she knew it, her idea snowballed, with other parents and students joining the festivities. On Saturday, June 6, Woody, along with other parents, family and friends held an official commencement ceremony for nine graduates from Miami Northwestern and Miami Central high schools.

Complete with a processional walk by graduates in full regalia; a keynote address from Olinda Elementary School Principal Cisely Scott; and remarks from Riviere, who is Miss Northwestern, the festivities ended with a drive-by parade led by City of Miami Police from Liberty City’s Belafonte TACOLCY Center.

“I am so excited for these young men and women,” Shaneka Woody said. “Their senior year was cut short due to COVID and my friend Latoya Roundtree and I decided to at least give these outstanding students the graduation they deserve.”

Vernice Holmes, 63, is Kearney’s grandmother. She said she was so grateful to be there in proxy for her daughter, Kearney’s mother who died last year.

Vernice Holmes, 63, is Kearney’s grandmother. She said she was so grateful to be there in proxy for her daughter, Kearney’s mother who died last year.

“I think this is so important because they were all looking forward to going on and now you see that COVID-19 can’t stop them,” Holmes said. “They’re trailblazing right on through by the grace of God and it gives me great pleasure to witness this occasion and that someone decided to … put this event together to celebrate the class of 2020. Now they won’t feel left out. My daughter wanted to be here, but since she’s gone, I’m here.”

Quenay, who was a dancer and cheerleader for the Miami Northwestern Bulls, said she couldn’t thank her mother enough for making her graduation special despite the challenges they have faced as a senior class this year.

“I was hurt at first because I was really looking forward to prom and everything, but it feels good. I know that she cares, and I know that she’ll be here for me because she’s doing something like this to make sure I have an actual graduation because you can only walk across the stage one time,” Quenay said.

Henry, 19, echoed Quenay’s sentiments. The former running back for the Central Rockets football team said he will go to Tusculum University in Tennessee on a football scholarship, where he plans to study physical therapy.

“We get to at least have an experience of something that was taken away due to the virus. I was upset because I was missing prom, missing grad bash and everything and felt I couldn’t really do anything about it, but this helps because … at least we have something similar to a real graduation,” Henry said.

Woody said her heart was full after seeing the joy on her daughter and the other graduates’ faces.

“Just for me to see the smiles on their faces, the way their faced lit up, especially during that parade, it was an amazing feeling. It made me feel like my job was done,” Woody said.

She said being able help Kearney create a beautiful memory while she was grieving her mother was like the cherry on top.

“When they came to tell me thank you, and they all burst out crying, it was an overwhelming feeling. You could tell Troyana really wished her mom was there, but it was a happy moment for her,” Shaneka Woody said.